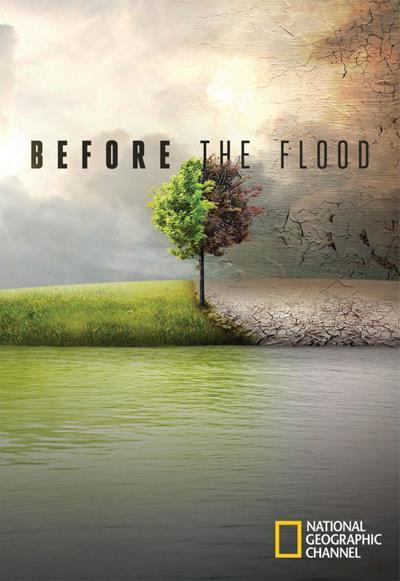 ‘It kind of looks like Mordor.’ That’s Leonardo DiCaprio’s verdict on the aerial view over Suncor’s oil sands mining operation in Alberta, Canada. In his role as a United Nations Messenger of Peace, the Academy Award winning actor takes up the cause of climate change in Before the flood. The documentary looks at what manmade emissions are doing to our planet now, and gives a warning of things to come unless we take action. The title refers to the middle panel of the 15th century painter Hieronymus Bosch’s work The garden of Earthly delights, in which Earth no longer resembles the paradise in the first panel and humans are beginning to influence and mix with the landscape they inhabit. This kick-starts the garden’s transformation into the into a barren, hellish wasteland that is depicted in the third panel. This precarious situation is analogous to the real-life state of our planet, DiCaprio warns, and unless humanity changes its ways this descent will continue past the point of no return.

Science-wise the film doesn’t go into great detail – carbon dioxide and methane emissions get a few mentions, but that’s about it. The emphasis is very much on the impacts, and the story is peppered with shocking statistics. We hear that Arctic sea ice could be completely gone by 2040, that 50% of the world’s coral has been lost in the last 30 years, and that the costs of climate change will have amounted to an estimated $44 trillion (£35 trillion) by 2060.

Stunning aerial footage helps to hammer the message home – in a journey around the world DiCaprio witnesses the thinning ice, as well as vast swathes of tropical forest being burned to the ground to create palm oil plantations, and of course the bare, Mordor-like oil sands landscape. Some of these shots were, in my opinion, more powerful than any statistic for reminding us the sheer scale of destruction of which we as humans are capable.

We also hear a variety of voices, from scientists and economists to politicians, activists and NGOs as well as the ordinary people – often from the most vulnerable parts of the world – who are already feeling the pressure from rising seas and adverse weather patterns. While DiCaprio himself has little in the way of scientific or technical expertise, his high profile clearly brings a great deal of influence – the majority of environmental documentaries do not feature appearances from Barack Obama and the Pope. As a viewer you also get a sense of his personal interest and connection to the cause, although I wasn’t 100% convinced his need to relocate filming of The revenant because of the lack of snow in Canada sat particularly comfortably alongside the situations faced by poverty-striken rural communities who have lost their homes or crops to floods and extreme weather.

As you might expect, the large corporations that exploit and utilise fossil fuels come under heavy fire, and ineffective politicians and influential sceptics get their portion of the blame. But it is also emphasised that we as individuals have our part to play both in taking a hard look at our lifestyles and in holding our leaders to account – politicians, after all, tend to respond to what the people want. I can’t say I learned a great deal scientifically from the film, but as a provocative and at times saddening look at the nature of things to come, it has certainly given me food for thought.