Burn: The Misunderstood Science of Metabolism 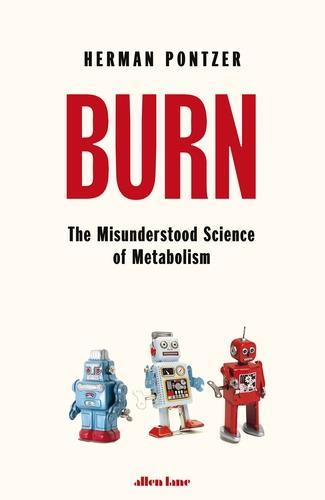 ‘Don’t expect to lose weight by doing more exercise,’ said the presenter of BBC Radio 4’s Today programme in the introduction to an interview with physiologist Herman Pontzer in March this year. I will admit to some initial scepticism, but I was eager to read the full story in Pontzer’s new book Burn. I wasn’t disappointed.

Burn is both engagingly readable and highly informative. The central message is very clear: if you want to lose weight, exercise alone won’t work; what will work is eating less. While few would argue with the efficacy of the latter, the reason for the former is that after millennia of evolution, our bodies are very well adapted to regulating and conserving the number of calories we burn each day. It’s not easy to burn any more.

Pontzer admits that this might initially seem counterintuitive. Surely the calories you burn during exercise will simply be added to those your body burns every day just to keep you going. But we are not like simple machines. A much better analogy, Pontzer suggests, is to think of our bodies as a business in which calories are the currency. Remaining solvent requires that if we spend more in one area (exercise), we must spend less in another (basic metabolism) so that if we do burn more calories during exercise, our body will compensate and use less supporting other functions.

The obverse of the calorie coin, however, is that while evolution may have ensured that we spend calories frugally, and for good reason, we efficiently bank any excess calories eaten as fat. Weight really is all about calories in versus calories out – there’s no escaping from the laws of thermodynamics. Of course, if you run a marathon every day or spend weeks trekking across Antarctica, you’ll burn so many calories that you certainly will lose some weight. But that’s not most people’s idea of an exercise regime designed to shed a few pounds.

Nevertheless, Pontzer is keen to stress that while exercise may be of little value in any weight loss programme, it has a multitude of other health benefits and we avoid it at our peril. Besides all the physiology, Burn considers the evolutionary history of primates, and why they burn fewer calories than other mammals, together with some aspects of human physical anthropology. He also has quite a bit to say about certain diets and food fads exploding many myths and discarding certain shibboleths along the way.

If you’re interested in a well written account of how our bodies use calories based on some of the key research in the field, Burn is a book you’ll very much enjoy reading.