From atoms to molecules: studies in the history of chemistry from the 19th century

From atoms to molecules: studies in the history of chemistry from the 19th century 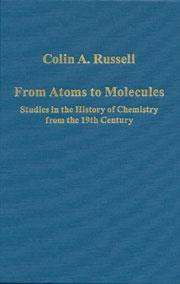 Colin Russell, a science historian with a penchant for history of histories, has assembled 18 of his articles and reviews associated with the development of organic chemistry during the 19th century. However, apart from a five-page index and a short preface, there is little new material.

The first chapter on chemist-historians disposes of any impression that chemists, from Thomas Thomson at Glasgow in 1830 onwards, became historians only in their dotage.

Three articles from the 1960s describe Humphry Davy’s founding of electrochemistry around 1802; this spur to Jacob Berzelius is expounded in several more chapters in the context of Swedish science. Differences emerged from 1811 between the experimentalist Davy, reluctant to give up phlogiston theory, and Berzelius’s electrochemical dualism. Russell highlights other cases of the adverse consequences of non-communication, as between Berzelius and Dalton and later between Edward Frankland, holder of the first chemistry chair at Manchester in 1851, and August Kekule.

The short article on August Hofmann, appointed director at the Royal College in London (precursor of Imperial College) in 1845 at age 27, shows his influence on English organic chemistry; descendents through the Perkins include the Nobelists Howarth, Robinson and Todd. Reciprocally, angliophile Hofmann engaged in teaching and industrial applications and helped found the German Chemical Society.

When he returned to Germany in 1865, he was succeeded by Frankland, while Carl Schorlemmer became the first British professor and an early historian (at age 45) of organic chemistry. Over the decades, Russell recognises alternating times of divergence and more successful ones of convergence between organic and other branches of chemistry.

Matured articles by Russell maintain their flavour, but one would have appreciated a few short biographies, as for Frankland, and more contemporary reflections on earlier interpretations.