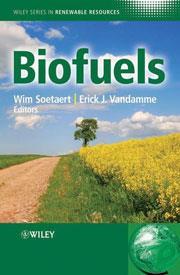 Biofuels have grown substantially in popularity and attention in the past few years, as concern grows over global warming.

Biofuels come indifferent flavours - first, second and third generation, and biologically and thermally derived. Much of the adverse attention in recent years has focused on the competition between food and fuel, where the same crops such as corn, grain, vegetable oils and sugar can either provide food or can be processed into so-called first generation biofuels, notably ethanol and biodiesel. Associated with this conflict is the poor and sometimes negative energy efficiency of some bioethanol processes and the lack of drivers and incentives to manage resources more effectively and more efficiently.

Second generation biofuels generally process whole crops, usually non-food crops or residues, with significantly higher yields and higher conversion efficiencies. But the competition for land remains a potential conflict. An authoritative book on biofuels would recognise these problems and conflicts and deal with them head on.

This book focuses strongly on biological processing of biomass and so the title promises rather more than the contents deliver. It starts with sustainable cellulosics in the US; bioethanol in the US and Brazil; biodiesel in various guises including technology, raw oils, waste lipids, and enzymatic production, a ’taster’ on thermal Fischer-Tropsch synthesis of hydrocarbons, and an interesting chapter on biomethane by digestion and hydrogen by anaerobic digestion.

Each chapter is well written and stands alone as an authoritative contribution, but this is not a compliment. The value of an edited book is that it can be produced more quickly and every chapter is potentially written by an expert in the field. However, an edited book needs editors prepared to actually edit, which includes good organisation of the content and consistent application of units, not a mish-mash of american, imperial and metric. Biomass weights need to be presented as either wet based with a moisture content or on a dry basis. Costs need to be quoted at a particular point in time and location. As a chemical engineer, I like to see mass and energy balances with well drawn flowsheets, all of which are too often missing.

Finally, the editors should ensure that the manuscripts are mutually compatible and consistent to aid understanding and comparison of biomass and biofuel yields.

Unfortunately this book does not live up to its title and contains too many structural, spelling and inconsistency faults tojustify more than three stars out of a potential five.