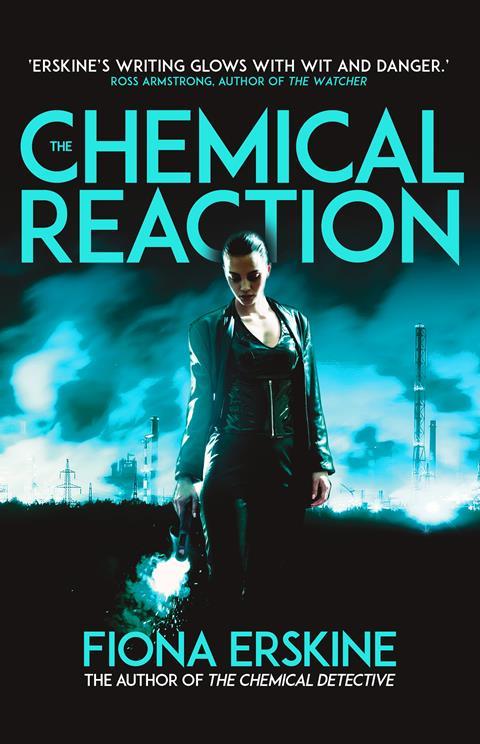 Jaqueline Silver is a badass chemical engineer with a nasty habit of stumbling into danger. Part sleuth, part adventurer and all scientist, she’s willing to improvise explosives on the fly and even maps out the chemical formula for oxytocin when she orgasms. Now in her second outing, chemistry has its own answer to Jack Reacher.

In The Chemical Reaction, Silver finds herself amid a chemical cocktail of international intrigue focused on priceless art and rare earth elements. It begins with Silver still in peril following her previous outing in The Chemical Detective, and, following a suitably explosive set-piece, launches into a globe-trotting adventure that takes us to the Black Sea, Sweden, Shanghai, and, uh, Yarm High Street.

The tale itself takes its time to get going, but once it does the pace continues to ramp up. There are periodic table-based codes to crack, professional athletes/strippers to seduce and deadly perils to evade. The book is chock full of characters that grab the attention, too (not least a Chinese stuntwoman who is rather handy with a sword). If there’s a flaw, it’s that usually the climactic events happen off page, with readers watching the prelude only to see the final results in a newspaper clipping – with the notable exception of one ill-fated swim near a hydroelectric dam.

Fortunately, Fiona Erskine’s heroine is good company, with a wry humour and a thoroughly modern attitude. Silver defies tropes that too often flood the genre, using brains rather than improbable skills and possessing a sensibility with which her readers can empathise. Silver does not go looking for trouble, but she doesn’t back down when it finds her. Refreshingly turning conventions on their head, the women of the story are firmly at the fore, while the villains remain satisfyingly moustache-twirling. The author’s notes at the back of the tale also add a sense of authenticity to the story (Erskine is herself a chemical engineer), providing useful real-world facts and context to the narrative.

The Chemical Reaction won’t leave you pondering the deeper mysteries of the universe, but it gives chemists a personalised twist on the summer read with enough drama to hold your attention.