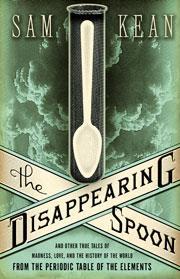 Not another book about the periodic table? Actually, I enjoyed this one very much, as it is not the usual history from Mendeleev’s first attempt to tabulate the elements to the variety of different physical forms of the table available today, nor is it a description of the physical and chemical properties, uses and applications etc of each element in turn.

The Disappearing Spoon, in a series of anecdotes, interesting facts and stories, describes how each element relates to human history, finance, mythology, conflict, the arts, medicine and the lives of the scientists who discovered them.

Sam Kean, a writer in Washington, DC, US, is a reporter at Science magazine; his writing style is light and races along from element to element, with a scattering of interesting asides. The book can be read through in order, or dipped into in spare moments: a useful notes and errata section gives further more detailed information which might have cluttered up the main text.

The sections which I enjoyed are too numerous to mention, but readers should look out for the tip of Parker 51 pens in relation to ruthenium, German first world war Bertha guns in relation to molybdenum and the story of David Haan in relation to radioactive elements, and Ytterby in Sweden where as many as seven elements were discovered.

Why is this book called The Disappearing Spoon? It refers to the classic prank of giving someone a teaspoon made of gallium (melting point around 30°C) to stir their cup of hot tea.