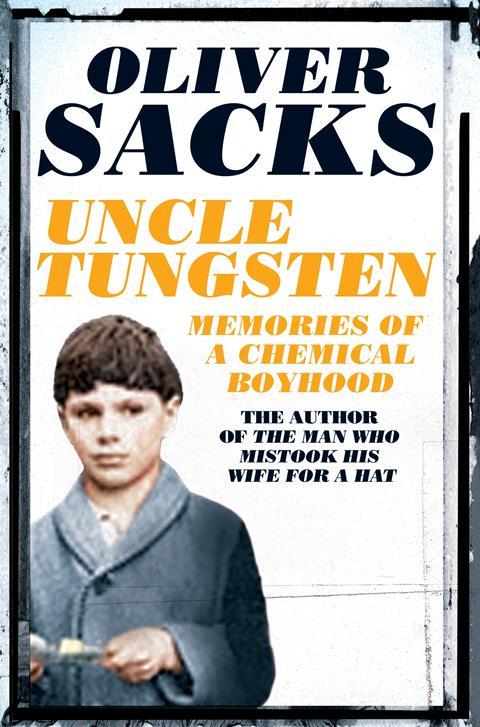 As someone whose job it is to commission, edit and write articles about chemistry, it’s hard not to be infuriated by the popular science classic Uncle Tungsten: Memories of a Chemical Boyhood. How did Oliver Sacks, who was a neurologist rather than a chemist, come to write one of the most popular and well-written chemistry books of all time?

Fortunately, the book itself goes a long way to answering that question. As a child, Sacks was obsessed with chemistry. Encouraged by an educated family, including the titular uncle, who ran a business using the heavy metal to make lightbulbs, he set up a lab in the old laundry room in his house. After one too many experiments ended up hurriedly flung onto the back lawn, the lab later included a fumehood.

Sacks manages to weave together at least three different strands through the book: his personal history, growing up in a large Jewish family in the UK in the 1930s and 40s; the story of his discoveries and explorations in chemistry during that time; and finally the history of chemistry to explain the science behind his stinks and bangs.

It’s hard not to get carried away by the young Sacks’ enthusiasm for the very real and physical joys to be gained from his obsession: the pleasing weight of a lump of tungsten, the delight at explosions, the nose-wrinkling disgust at the smell of hydrogen sulfide, the pride at making his own photographic emulsions. How much have younger generations of chemists – myself included – lost in being prevented from such thorough experimentation by neutered chemistry sets?

In this sense of learning chemistry through exposure and experimentation with chemicals themselves – and the quality of the writing – I was often reminded of Primo Levi’s The Periodic Table. But where Levi comes across as a trained and professional chemist, doing painstaking analysis and troubleshooting industrial problems, Sacks paints a picture of himself as an entranced schoolboy. Not many schoolboys go on to become such fabulous writers, capable of putting their obsessions into a secure historical and theoretical context over 300+ pages.

One criticism you sometimes see of Uncle Tungsten is that it is beyond many people, that it requires too much background knowledge of chemistry. In certain places, I did wonder if Sacks went into too much detail for a completely lay reader – but I would like to think most people could let those details wash over them and enjoy the story. For the chemically inclined – especially for those students eager to start their own atomic adventures – it’s hard to think of a better book.

We celebrate 20 years of this popular chemistry classic on this month’s book club podcast, which you can listen to here.