Unfit for Purpose: When Human Evolution Collides with the Modern World 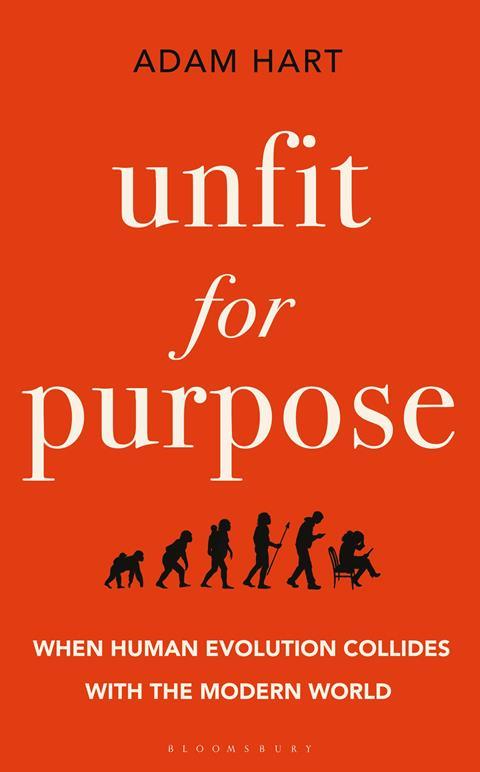 Many a time, while trapped in another dreary meeting that really should have been an email, I have found myself wondering: ‘Is this really what we were designed to do? Did our evolutionary forefathers really drag themselves upright and cross continents by foot just so I can scald my internal organs on coffee and pretend to understand what an algorithm is?’

Personal existential malaise aside, it is a question often pondered by both scientists and by the media, who tell us repeatedly that our modern lifestyles are terrible for our bodies. Headlines inform us that sitting down for 14 hours a day with only the occasional vertical interlude to forage high fat, high sugar snacks will send us to an early grave. The constant consumption of fake news, real violence and the unsolicited opinion of strangers means we are mentally stimulated to the point of pathology.

It is exactly this physiological and psychological mismatch that Unfit for Purpose grapples with. Author Adam Hart explains to us that we really aren’t built for this after all. ‘The great gulf between what we are as people […] and what we were as animals is the central theme of this book,’ he writes.

Hart explains this all using simple – but not simplistic – prose. He begins with a digestible and engaging overview of the fundamentals of evolution before using that as a framework over which to drape specific examples of humans as both modern world-builders and ‘walking, talking apes’. Gently and genially, he describes how the agricultural age, modern microstressors and our innate desire for connection have led to a society ravaged by obesity, addiction and fake news. Technical terms are often explained through metaphor, while intricate scientific concepts are purposefully introduced in the same language as sensationalist tabloid headlines. This makes the subsequent takedown and explanation both easy to follow and exceptionally satisfying.

Hart’s wry humour and knowledge are clear throughout, as is his warmth – this does not read as a preaching scientist telling the layperson how to live their life. Instead, it feels like a friendly sort of commiseration, where both author and reader acknowledge that these bodies we occupy don’t really mesh too well with the world we’ve created.

A word of caution. To those itching to shrug off the confines of the modern world and return to a more primitive form of living, Unfit for Purpose could become a manifesto, filled with justification for fleeing naked back into the wilderness. To the rest, it is an enjoyable, accessible and highly entertaining insight into exactly why so many of us seem to be lactose intolerant and addicted to Instagram, perfect to unwind with after a long day of staring at spreadsheets.