In August 2009, the world was shown the first ever ‘photograph’ of a molecule. It was the first time every atom and every bond in a molecule had been imaged and people were amazed. The molecule was pentacene, five benzene rings fused in a line, and the team behind the work was the atomic manipulation group at IBM Research – Zurich, Switzerland.

Revealing molecular structures and properties at unprecedented levels of detail is all in a day’s work for this group. Pentacene’s picture was taken using a type of atomic force microscopy (AFM) and the same method has since been used to measure the charge on single atoms and even to assess bond orders and bond lengths in single molecules. The team has also employed scanning tunnelling microscopy (STM) to see molecular orbitals and Kelvin probe force microscopy (KPFM) to image the charge distribution in single organic molecules. 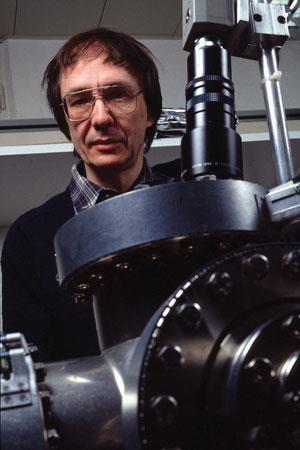 Gerhard Meyer has a long history with AFM and IBM

All the members of the atomic manipulation group are physicists, but their work is obviously of great interest to chemists. ‘Chemists really like being able to directly see molecules,’ explains team member Leo Gross. ‘We collaborate with many different groups of academic chemists.’ Sometimes traditional, indirect techniques such as mass spectrometry and nuclear magnetic resonance (NMR) are not enough when trying to pin down the structure of complex molecules, so being able to take a snap of a molecule is particularly useful to chemists.

The first example of this was in 2010 when the team worked with Marcel Jaspars’ group at the University of Aberdeen, UK, to solve the structure of cephalandole A, a metabolite extracted from the Dermacoccus abyssi bacterium. NMR had identified four possible structures for the molecule, but they needed the help of the IBM team to determine which of the four was correct. Since then, several more projects have identified previously elusive structures of natural products. ‘It is great that chemists approach us with interesting ideas, which are important to the field of chemistry, which we would not have thought of ourselves,’ says Gross. ‘We also approach them to ask them to synthesise molecules with tailored properties.’

The team is currently focusing its efforts on KPFM. In 2012, the team imaged the distribution of charge across a single molecule – the X-shaped naphthalocyanine – for the first time. This molecule switches between two different tautomers when a voltage is applied, and the team were able to see how the charge rearranged within the molecule when it switched. This work led to a collaboration with chemists Silvio Decurtins and Shi-Xia Liu at the University of Bern in Switzerland. The Bern group has synthesised electron transfer complexes with electron donor and electron acceptor parts, and the IBM team is using KPFM to study the electric field generated by the intramolecular charge distribution.

Returning to the fold

The most senior researcher in the group is Gerhard Meyer. He has been a research staff member at IBM Research – Zurich since 2002, but his history with IBM goes back much further. ‘After I received my PhD [in AFM] from the University of Hannover, Germany, [in 1987] I became a postdoc in the IBM research labs in the US in Yorktown Heights,’

We don’t have to do any administration. That is a really big advantage

Meyer explains. After four years there he returned to Germany. ‘I spent 10 years at the Free University of Berlin as a scientific assistant with Karl-Heinz Rieder,’ he says. Rieder is a surface scientist with an interest in scanning probe microscopy, and it was there that Meyer starting working on scanning probe microscopy at low temperatures – an approach the team still uses today.

Meyer then switched to another research institute in Berlin: the Paul Drude Institute for Solid State Electronics. A year later he moved again, this time to the IBM research labs on the outskirts of Zurich.

But while Meyer may be the most senior researcher in the group, he does not have any managerial responsibilities. IBM Research has very flat hierarchies, meaning its scientists are not required to participate in people management. ‘It is really great here,’ says Meyer. ‘We don’t have to do any administration. It is all done by other people and that is a really big advantage.’ For Meyer, this means he still has plenty of time for his favourite part of the job: practical work. ‘The lab work is what I enjoy,’ he explains. ‘A professor in a university with a big group doesn’t have the opportunity to work in the lab. For me it is much better here.’

Gross’ interest in scanning probe microscopy also started early. After an undergraduate physics degree from the Free University of Berlin, Gross spent a year in the labs of Ulrike Diebold at Tulane University in New Orleans, US. ‘She is an expert in titanium dioxide and STM [scanning tunnelling microscopy], and I really enjoyed working with the scanning probe there,’ he explains. ‘It was clear to me that I wanted to pursue working with STM.’ 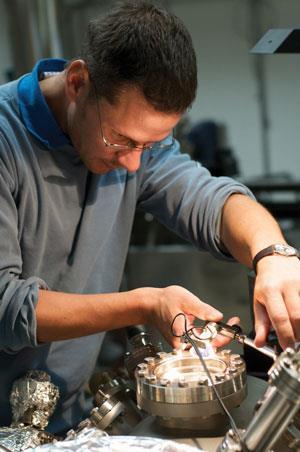 Gross then moved back to Germany to the University of Münster for a master’s degree under the supervision of another scanning probe expert, Harald Fuchs. ‘Then I moved back to Berlin and I did my PhD in the group of Karl-Heinz Rieder,’ says Gross. There Gross had a few months overlap with Meyer, and he also worked with low temperature scanning microscopy.

After completing his PhD in 2005, Gross moved to IBM Research – Zurich as a postdoc for Meyer in the atomic manipulation group. He initially worked on a nanostencil lithography technique for fabricating nanostructures, and used scanning probes to characterise the structures. ‘I soon started working with AFM using silicon cantilevers at room temperature, then I worked on the low temperature systems and then using sensors made from quartz tuning forks,’ Gross says. In 2009, Gross was appointed as a research staff member at IBM.

Gross is a strong supporter of life as a researcher in the IBM research labs. Although he has to take time away from the lab for tasks such as applying for funding – the research is paid for by a mix of European research grants and IBM funding streams – he still has time for experiments. ‘I can still spend time in the lab, I like that a lot,’ says Gross. ‘That’s one of the benefits of a position here.’

Compared to university academics, researchers here do not have to teach or involve themselves in much administration. However they do still have the opportunity to work closely with, and inspire, junior researchers.

The atomic manipulation group currently has one PhD student – Bruno Schuler – and two postdocs. ‘I enjoy working closely together with the PhDs and postdocs,’ says Gross.

After graduating in physics from the Swiss Federal Technology Institute (ETH) Zurich, Schuler started a master’s degree at the same institution. As part of this degree he wanted to gain experience of research in a non-academic environment. ‘I was looking for a company and realised that IBM would be a suitable place because [it has] the corporate environment, but we can still do fundamental research,’ says Schuler. ‘I think this is quite rare.’

Schuler enjoyed the experience so much that he has stayed to carry out his PhD research. He is now two years into that PhD, and although Schuler is based in the IBM research labs his PhD is affiliated with the University of Regensburg in Germany. ‘There my doctorate [supervisor] is Jascha Repp who formerly worked here at IBM but is now a professor [at Regensberg],’ Schuler explains.

Schuler is another advocate of IBM Research – Zurich. ‘The main difference to the academic environment is that you have a much higher ratio of senior scientists to junior scientists,’ he explains. ‘I am the only PhD in our group and the senior scientists like Leo and Gerhard take a lot of time to give advice on certain problems. That’s really great.’

All three scientists are also extremely happy about the quality of the fundamental research they are carrying out there. IBM doesn’t have an immediate commercial use for this research, in fact Gross suggests it may be 15 years or more before the work leads to commercially useful devices such as single-atom or single-molecule switches. But that doesn’t mean that the high profile work of the atomic manipulation group isn’t immediately useful for the company. ‘It shows that we are doing good science here at IBM,’ explains Gross. ‘I think it attracts people with scientific backgrounds to work for the company.’