How I created an $80 million zeolite company

Javier García-Martínez shares how to mix science, entrepreneurship and art

Few chemists are able to use their work to become self-made millionaires. For Javier García-Martínez, the seeds of his success were sewn during his postdoc – and he hasn’t looked back. 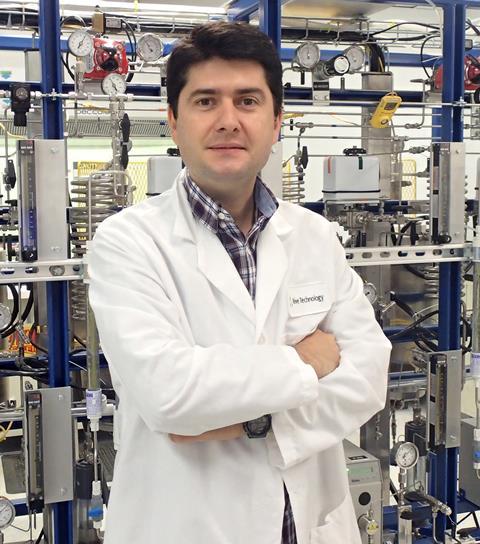 García-Martínez completed his PhD in inorganic chemistry in Alicante, Spain, focusing on environmental applications of zeolites. Part of this doctorate was spent in the US, where he worked developing new catalysts for cleaner transformations at California Institute of Technology and the University of California, Berkeley. He then applied for a postdoc at Massachusetts Institute of Technology (MIT).

‘Like most people my age, I was hoping to publish tons of papers, swell up my CV, and succeed in academia,’ he says. However, at MIT he stumbled upon an environment that fostered entrepreneurship. ‘Everyone talked about how creating your own company helps you carve out your own future.’ Given he had patented some his discoveries on mesoporous zeolites, García-Martínez decided to explore this possibility – and to create a company to commercialise his technology.

‘Zeolites are very flexible,’ García-Martínez says. ‘They can undergo structure rearrangements. We can use this property to our advantage to introduce additional porosity on demand,’ he adds. ‘Using surfactants, we were able to generate bigger pores in zeolites, dubbed mesopores.’ García-Martínez realised the potential that this technology had for the chemical industry and decided to start his own business in Oklahoma.

‘I knew Oklahoma was no Silicon Valley, but I moved there to work together with Marvin Johnson, one of the best experts in the field with more than 250 patents,’ he explains. ‘I like to think of my stay there as our own “garage period”, where we started experimenting, testing the applications of our first mesoporous zeolites with a small team of just five people in the lab,’ he says. Javier García-Martínez began by sending kilos of his zeolites to a Canadian company that started testing them in oil cracking. The results were extraordinary – in a very short period of time, his company attracted around $80 million (£62 million) from investors. Today, Rive Technology has commercialised its ‘molecular highway’ catalysts and employs over 50 people across the world. ‘Now, we are diverting from oil cracking to new applications like the purification of biofuels, water treatment, biomass valorisation and the production of fine chemicals,’ García-Martínez says.

Far from keeping his technology a secret, García-Martínez believes in sharing his discoveries with the scientific community. ‘We protect our intellectual property through patents, of course, but we also love publishing our results in peer reviewed journals,’ he says. ‘This way, we contribute to a better understanding of the field.’ García-Martínez has now created a community of scientists around the field of mesoporous materials. Every year, during the American Chemical Society national meeting, he co-organises the International Symposium on Mesoporous Zeolites, which gathers experts from all around the world. ‘Creating a community around the field is key to help it achieve its full potential.’

Today, García-Martínez has settled back in Alicante. ‘I feel I owe quite a lot to my country and the public education I received here,’ he says. Here, he also enjoys a second passion: art. In 2007, he designed a stamp honouring Dmitri Mendeleev for the Spanish postal service. ‘It was inspired by [Dutch painter] Piet Mondrian,’ he explains. ‘I left some blank spaces to represent the eka-elements the Russian chemist predicted.’ The Spanish postal service minted more than 40 million copies.

This is only part of García-Martínez’s dedication to science advocacy. He believes in a concept he calls ‘the new chemist’ – someone that goes beyond the bench and takes on leadership. To date, García-Martínez has served in the International Union for Pure and Applied Chemistry (Iupac) for more than 10 years. ‘It was just serendipity,’ he explains. ‘I remember meeting IUPAC’s president by chance during a conference. Somehow, after a casual conversation, he encouraged me to apply for a position in the inorganic chemistry division, as they were looking to attract younger chemists. Within Iupac I found a family. I encountered people with the same passion for chemistry that I have.’

García-Martínez is also a member of the World Economic Forum, and constantly lobbies for science hoping for a deep change in society. ‘Scientists should be more than academics, we should reclaim our role as intellectuals and opinion leaders. We need people that youngsters admire: we need a Rafael Nadal of science.’ He has also set up his own non-profit organisation, Celera, which aims to boost the career of more than 40 young people in Spain by giving them specialised training in skills that are often disregarded in traditional academia: leadership, project management and entrepreneurship. Celera also provides scholars with access to a wide range of resources and opportunities around the world, promoting networking opportunities and personal growth.

‘This is all a wonderful dream come true,’ he concludes.