A recently developed electron microscopy technique has allowed scientists to measure van der Waals interactions by precisely imaging the changes in orientation of individual para-xylene molecules confined in the channels of a zeolite matrix.1 The setup resembles a nanoscale compass in which the hydrocarbon molecule is the rotating pointer and the positions of the atoms around the hole define the direction markers.

‘Our results provide a method to directly “see” single molecules and their interactions,’ says Xiao Chen from Tsinghua University in China. She points out that van der Waals forces play an important role in many processes but measuring such interactions is challenging and usually involves sophisticated techniques. Using an imaging mode called integrated differential phase contrast scanning transmission electron microscopy (iDPC-STEM), she and her colleagues have now been able to track host–guest interactions within a zeolite. The team took advantage of the fact that the perimeters of the large holes in this zeolite are composed of 10 oxygen and 10 silicon atoms, which were numbered to indicate 20 different directions that are around 18° apart. 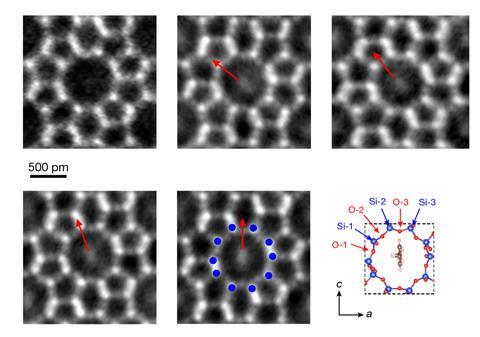 ‘The idea is to use a molecule that fits neatly inside the zeolite pore as a compass for monitoring the microscopic structure of the pore wall and hence the van der Waals interactions between the molecule and the porous solid,’ comments Peter Liljeroth at Aalto University in Finland, who was not involved in the study. He explains that the para-xylene pointer preferentially adopts specific orientations that reflect different interactions. ‘Electron microscopy is used to resolve the angle of the molecular backbone with respect to the atomic structure of the surrounding pore.’

The researchers carried out first-principles calculations to relate the changes in orientation with variations in the van der Waals forces. ‘We calculated the energies of para-xylene molecules with different orientations based on various channel models,’ Chen says.

Ivan Lazić at Thermo Fisher Scientific in the Netherlands, one of the developers of the iDPC-STEM approach and co-author of the study,2 notes that imaging this kind of system isn’t easy. ‘Zeolites are electron-dose-sensitive materials and single molecules trapped within them even more,’ he says. ‘But this technique uses all the available electrons and is highly dose-efficient.’

Stephen Pennycook, a retired microscopist based in the US, agrees. ‘The key advantage of this method is that it efficiently images both light and heavy atoms,’ he says. ‘Here, even one light molecule is detected within a zeolite channel which is several nanometres long.’ Pennycook adds that being able to see the light and heavier parts of a system simultaneously is a significant achievement. His son did this several years ago too, together with colleagues, using a technique called electron ptychography.3

Chen believes that the new strategy could be extended to other systems. ‘For nearly all kinds of zeolites and metal–organic frameworks, we could directly image guest molecules that are size-matched to their channels and cages,’ she says.