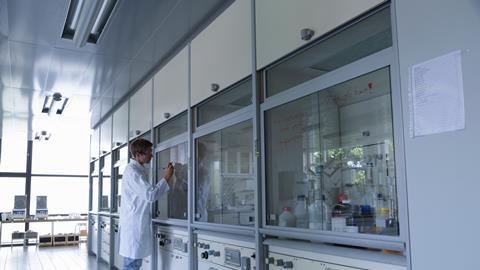 How to run a sustainable chemistry lab

A lot of research focuses on sustainability and climate change – but how much thought is put into making research itself more sustainable?

‘Per square meter, a lab uses three to five times more energy than office space,’ says Brian McCarthy, a researcher at Uppsala University in Sweden and part of Towards Greener Research, a sustainable lab network that shares advice on greener lab practise. ‘It felt a bit hypocritical that we were consuming all these resources but not putting in the extra effort to be more sustainable ourselves.’

We’re used to turning off the taps whilst brushing our teeth and taking reusable water bottles everywhere, but it’s also important to extend these sustainable habits into the lab.

Don’t forget about your fume hood

‘Start closing your fume cupboard sashes because ventilation systems use the most energy typically in the lab,’ says Martin Farley, who manages University College London’s Laboratory Efficiency Assessment Framework (LEAF), a certification that labs can sign up for to guide them to improve their sustainability. Research shows that a fume hood with the sash left open consumes the same energy as around four households, so ‘we basically have a little hamlet,’ McCarthy says, after counting around 25 fume hoods in the research lab where he works. Fume hoods need more energy if the sash is higher, so even if you’re only stepping away for a few minutes remember to lower it, or turn off the hood when safe to do so.

Cintia Milagre, an assistant professor at the São Paulo State University in Brazil, suggests labelling solvents depending on their environmental impact. Milagre realised that the most hazardous solvents were often used unnecessarily, especially in undergraduate labs. Now, solvents in Milagre’s lab are labelled red, yellow or green to make it easier to, quite literally, choose the green option. Milagre does acknowledge that ‘it’s not about being so strict … we will try to use better ones, but research needs to go on’.

Have a spring clean of your store cupboards, fridges, freezers and your samples. Farley advises keeping track of materials, especially those used by students and staff who are leaving. ‘If you manage your samples, and you know what you have in the freezer, it makes it easier to access what you have,’ he explains, which prevents chemical waste.

Consider making a timetable for equipment that doesn’t always need to be switched on, which will also make it easier to share amongst lab groups. ‘The autoclaves were turned on many times in a day without full loads,’ says Milagre. Now autoclaves in Milagre’s lab are on at 9am and 2pm so everyone can plan their experiments and know when equipment is available. ‘That saved us a huge amount of energy,’ she adds.

‘We identified ovens in our laboratory that could be on timers,’ McCarthy suggests as well. ‘We just walked around with one of these cheapo energy monitors … and then made a judgement call – is it worth investing time to try and influence change?’

Is your freezer too cold?

Commonly freezers in labs are at -80˚C, but Farley cautions that ‘each one of those freezers can use as much energy as a house.’ Such cold temperatures are often unnecessary. ‘If you raise the temperature to -70˚C you save about 30–40% of electricity,’ says McCarthy. Only 15 years ago ultra-cold freezers would be at -65˚C or -70˚C, which was sufficient for most areas of research. An online spreadsheet (see LINK) has been created by volunteers to share the temperatures at which they’ve been able to store biological samples effectively, often for several years.

Where it is safe to do so, switch to glass alternatives instead of relying on single-use equipment – chemistry is known for an abundance of glassware after all. ‘Researchers from low-income countries usually do lots of green and sustainable things without knowing,’ says Milagre who was surprised at the amount of single-use plastic in some labs, adding, ‘we refill our pipette tips, we always do this.’

As well as reducing single-use plastic, go back to basics and improve general waste disposal and recycling. ‘The problem is that these yellow [hazardous waste] bins are all over the lab and they’re really convenient,’ says McCarthy, who noticed around half the waste in these bins was just normal rubbish. ‘Put some effort into thinking of what can and cannot be recycled and how to recycle it correctly,’ he suggests. Milagre also recommends making sure recycling is easy to do by placing more recycling bins in labs and around campuses.

Critically thinking about research practise has benefits alongside sustainability. ‘We started talking not just about sustainability but about how to just be a better lab,’ says McCarthy. ‘We started categorising all of the resources that we find useful, thinking of mental health, and having standard operating procedures for doing stuff safely.’

Organises regular talks online and resources to learn more about sustainable lab practises, as well as networking event. ‘I became a My Green Lab Ambassador and it’s awesome,’ Milagre says, and can give you credibility when talking to colleagues about sustainability.

Researchers have created this spreadsheet to share the temperature of their freezer and the types of samples stored.

Blog created by researchers in The Netherlands to share tips for sustainable lab practise.

Raises awareness of more sustainable research practise and shares advice on how to start.

Provides workshops and other resources on the principles of green chemistry.