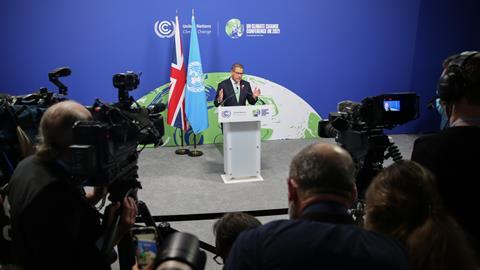 Countries have been asked to set more ambitious emissions reduction targets by next year’s climate talks, after pledges made at Cop26 in Glasgow fell short of action needed to limit warming to 1.5°C by the end of the century.

Many countries submitted plans for larger emissions cuts, but Climate Action Tracker, which provides an independent scientific analysis of governments’ climate actions, estimates that even if implemented the new targets leave the world on track for an average temperature rise of 2.4°C. Kenya’s environment minister, Keriako Tobiko, told the summit that major emitters must align their commitments with 1.5°C. For Africa ‘1.5°C is not a statistic – it is a matter of life and death’, Tobiko said.

But the Glasgow Climate Pact, agreed by almost 200 nations after 12 days of talks, signals the beginning of the end of coal, and of fossil fuel subsidies. The US climate envoy John Kerry described the $2.5 trillion spent on fossil subsidies since the Paris Agreement was signed in 2015, as ‘the definition of insanity’. It sets rules for carbon markets and the reporting of progress on targets, and a doubling of finance for adaptation for developing countries. As expected, money was a defining issue of the talks. Developed nations still haven’t delivered on a pledge – made in 2009 – to provide $100 billion (£74 billion) a year of climate finance to developing nations, even though it’s acknowledged that trillions will ultimately be needed. Nor were developed nations prepared to agree finance for countries to deal with the already evident consequences of climate change.

Chris Stark, chief executive of the UK’s Climate Change Committee, welcomed the clear recognition that limiting warming to 1.5°C is the overarching aim. The text, he said, was ‘super clear on the science of that’ and the ‘explicit referencing’ of the need to cut emissions by 45% this decade.

How are we to judge progress towards that aim? One of the big sticking points in Glasgow was around transparency – how nations report their progress with sufficient clarity and reliability. Pete Betts, a former EU climate negotiator, told journalists that the whole climate regime rests on transparency. ‘If you don’t deliver your target there’s no penalties. The only thing is naming and shaming – it’s public pressure [and] having a functioning transparency regime is key to the whole system working.’

Now all countries will have to use the same format to report their greenhouse gas emissions, progress towards the pledges they’ve made, as well as the contributions they make to climate finance to help developing countries mitigate and adapt to climate change. The private sector will also come under the spotlight, with UN secretary general Anthony Guterres announcing he would set up an expert group to address the ‘deficit of credibility’ over emissions reductions and net-zero targets, by setting clear measurement standards.

Aside from the formal negotiations, a series of announcements by countries and businesses – from halting deforestation to redirecting private finance towards the net-zero transition and scaling clean technologies – signalled a systemic change in the direction of travel, and a sense that business is impatient for policy to move faster.

A global pledge to cut methane emissions by 30% by 2030 was signed by 110 countries, but not by India, Russia and the biggest methane emitter China. The latter, however, has agreed to discuss methane as part of a new cooperation agreement with the US announced in the second week of the Glasgow talks. The World Business Council for Sustainable Development says the methane target could be more ambitious. It wants to see a 40% reduction by 2030, and 75% by 2050, and a broader focus to include agricultural and waste sectors.

A confusing series of announcements on coal saw Poland appear to backtrack on bringing forward its 2049 deadline to end coal use, but in what could be a model to help coal-dependent nations transition away from the fuel, the US, UK, Germany and EU announced they would provide $8.5 billion to help South Africa speed up closure of its coal power plants and shift to renewables.

Almost 40 countries and development banks have also signed an agreement to stop financing fossil fuel projects overseas and instead support clean energy, with the caveat ‘except in limited and clearly defined circumstances’. The statement made no mention of domestic support for fossil fuels, but a smaller group of nations and states led by Denmark and Costa Rica announced that they would move beyond oil and gas. Its eight core members said they would ‘end new concessions, licensing or leasing rounds for oil and gas production and exploration’ and set a Paris Agreement-aligned date for ending production and exploration in their jurisdictions. Neither the UK nor major oil and gas producers signed up.

At Cop26, the UK did, however, launch a series of ‘Glasgow Breakthroughs’ aiming to make clean technologies the most affordable and attractive options in emitting sectors across the world by 2030. Progress would be achieved through policy changes, shared R&D effort, coordinated public investment and mobilising private finance, especially in developing nations. Clean power, green steel, zero-emission vehicles, renewable and low carbon hydrogen and ‘climate resilient’ agriculture are the first targets that over 40 countries have signed up for. A plethora of announcements from business and philanthropists followed. Among them a ‘first movers’ coalition of 25 global companies have made purchasing commitments to help scale technologies that will decarbonise steel, shipping, aviation and haulage. All that remains now is delivery.