Francisco Radler, the man in charge of the Rio 2016 Olympics anti-doping operation, reveals how his team has prepared 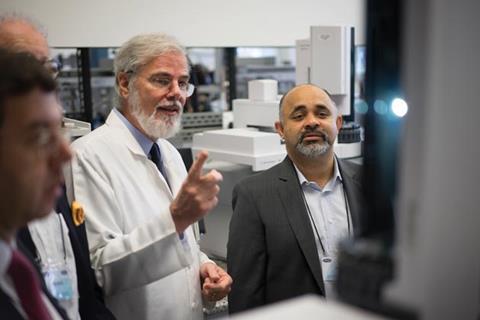 As head of the Brazilian Doping Control Laboratory (LBCD), Francisco Radler de Aquino Neto has the daunting task of running the anti-doping operation for the 2016 Rio Olympics. His long career in analytical chemistry and management stands him in good stead for the task, but logistical issues threaten to keep him awake at night.

The LBCD is part of the Laboratory for the Support of Technological Development (Ladetec), a cluster of eight ‘associated laboratories’ in Rio de Janeiro Federal University’s Institute of Chemistry. The laboratory recently regained accreditation from the World A­nti-Doping Agency (Wada), following significant investment. It now has gleaming new facilities, built at a cost of R$134 million (£26 million), with another R$54 million spent on equipment and materials.

Radler has been Ladetec’s coordinator since its inception in 1984. At the time, the main piece of kit was a gas chromatograph–quadrupole mass spectrometer, which was essential for analysing mixtures. With little available research funding, the team began contract work for the Brazilian oil company, Petrobras. Then, with help from the government, Ladetec obtained­ World Bank funding to set up service laboratories on the understanding that they would eventually become self-financing.

[[A laboratory will face the challenge of performing the same amount of work that it usually does in a year in about three weeks]]Radler can trace his lab’s entry into the anti-doping arena to the Copa America 1989 football tournament, which was hosted by Brazil. With its expertise in gas chromatography–mass spectrometry (GC–MS), Ladetec stepped in to fill an anti-doping role, with back-up from a lab in Barcelona, Spain. ‘The Barcelona team was, and still is, a leading actor in doping control analysis and it was fun to have them on board to set up the doping control laboratory,’ recalls Radler.

‘When we decided to be involved in anti-doping analysis, among the justifications presented to our institute of Chemistry were several technical ones and one strategic: the possibility of getting the public attention through work in sports associated events,’ Radler explains. ‘This would eventually give the university the opportunity to raise funds for its development.’

LBCD really proved its worth in the 2007 Pan-American Games, paving the way for its 2016 role. In preparation, Radler was invited to observe the drug testing operations for the London 2012 Olympic and Paralympic Games. ‘It was very enlightening concerning the logistical nightmare it represents,’ laughs Radler. ‘A laboratory will face the challenge of performing the same amount of work that it usually does in a year, with reporting times of ten working days, in about three weeks, with results delivered in 24 hours.’

In terms of doping control, the four years between summer Olympic Games is an ‘eternity’, says Radler. ‘Technical development on one side and doping sophistication on the other pushes the laboratory to the maximum in terms of improvements and innovations.’

LBCD managers have countless tasks, including shift management, overseeing sample flow through the many laboratories, interpreting and checking data and reporting results. Not to mention managing vast stocks of consumable lab items. It’s a huge undertaking, and all of the Ladetec labs will join the Olympic effort; by the end of this year, Ladetec will employ 170 staff, soaring to 240 for the Olympic season. Following the Games, the teams will continue to benefit from the new facilities, while the Institute of Chemistry will also be able to take more students.

Managing a group of scientists with such a ‘diversity of skills and interdisciplinary knowledge’ is a ‘major challenge’, says Radler. ‘The main struggles are to coordinate the labs and implement strategic planning for their mutual support and development.’

Radler’s enthusiasm is undented by recent news of doping by a handful of London 2012 athletes, as revealed by sample reanalysis. He suggests that the news reflects the fact that doping control systems are improving, adding that anti-doping teams are kept on their toes by the ‘continuous, but sad, determination of athletes to try new forms of doping’. ‘This attitude challenges the ability of the laboratories to develop new and better methods of detection of doping practices. Therefore it is a field of constant mutation and need for R&D,’ he adds.

With Wada under ‘enormous pressure’ following an unprecedented number of doping scandals, LBCD recently found its activities temporarily suspended while auditors scrutinised every aspect if its work. Its suspension was lifted on 20 July ­– less than three weeks before the Olympics starts on 6 August. ‘The laboratory personnel are comforted by the fact that their strenuous effort to cope with our scope of accreditation was finally rewarded and that all may now focus on the huge challenge ahead,’ says Radler.

Ladetec has always managed to finance itself. ‘This will be harder now, needing more managerial focus, due to the size and sophistication of our facilities and equipment,’ says Radler. ‘We have an extraordinary legacy from the Games, but it’s a very demanding one in terms of operational cost.’

The Ladetec labs tend to balance each other out financially. ‘Sometimes the most expensive laboratory is not the one bringing the higher income,’ Radler explains. ‘The challenge is to keep in the minds of the workforce that today someone is draining the income of the partners but tomorrow they may become the sponsor.’ For example, in the 1980s and 2000s, the geochemistry lab brought in the highest income, while LBCD is leading in the 2010s.

For those considering anti-doping as a career, a background in analytical chemistry may be an advantage, Radler says; although doping control attracts professionals from many fields, including toxicology, biology and biotechnology, analytical chemistry still forms its core. ‘It is an excellent field to acquire a multitude of skills and knowledge, which may open opportunities to diversification in one’s career,’ he concludes.

In his career, Radler has relished building a structure that joins ‘state-of-the-art research, chemical metrology and quality control’, as well as strengthening his university’s teaching framework. Although his ‘overwhelming’ administrative burden has taken him away from direct research, he follows scientific developments at Ladetec.

And despite needing to rely mainly on students and collaborators to keep up to date with scientific advances, Radler hopes to ‘retreat to his former, more scientific activities’, as well as to spend more time with his family, once the Games are over and the focus moves to Tokyo 2020.