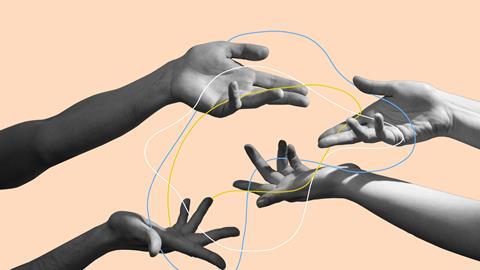 The nickel crystal that catalysed collaboration

An apparent scooping turned into something much more valuable

Before starting their weekend, Rosie Somerville and Marina Pérez-Jiménez decided to quickly check the latest literature. A few minutes later, the lab WhatsApp group was on fire. After months of arduous work on different organometallic complexes, some of them had just been published. What now?

Very often, researchers across the world work on similar developments without knowing about each other’s results. The latest recipients of the Nobel prize for chemistry, Benjamin List and Dave MacMillan, independently developed organocatalysis. But sometimes the science hall of fame works on a first-come, first-served basis. What if someone scoops the discovery?

For Somerville and Pérez-Jiménez, being scooped sparked collaboration. At the time, they were working as a postdoc and a PhD student, respectively, at the Institute for Chemical Research in Seville, Spain, under the supervision of Jesús Campos. ‘In the 1970s, researchers had reported what seemed an elusive hexagonal-planar nickel complex,’ says Campos. ‘Because our group specialises in the structure and reactivity of unconventional species, we decided to explore further.’ At the same time, Andryj Borys, a postdoc in the group of Eva Hevia at the University of Bern, Switzerland, was synthesising similar species on the Schlenk line. ‘We were intrigued by the same nickel compound, published originally in 1979,’ he says. Soon after, they reported their first set of results in Angewandte Chemie.

‘Our structures were identical,’ explains Campos. ‘We agreed, together with Rosie and Marina, to contact Eva [Hevia] to congratulate them on the paper and catch up, to avoid further overlaps. Perhaps surprisingly – they’re both organometallic chemists from Spain – Campos and Hevia had never worked together. Nevertheless, they quickly connected. ‘The conversations were super polite and transparent,’ explains Hevia. ‘We soon realised our unpublished results were indeed very similar, yet complementary.’ After checking everybody was on board, collaboration commenced.

It was like painting the same picture, but each using our own strokes and techniques

‘We established a fully transparent environment, everybody had access to all the data, drafts and discoveries,’ adds Hevia. This generosity paid off – the different points of view contributed to a broader vision of the relevance of the discoveries and helped them reach a wider audience. ‘Independently, our papers would have been weaker,’ agrees Campos. ‘And, more importantly, we had tons of fun!’

Somerville and Borys were happy to share first authorship. ‘We all trusted each other,’ Somerville explains. ‘It was a great opportunity to approach chemistry in a different way, […] like painting the same picture, but each using our own strokes and techniques.’

As it turns out, the structure proposed in the 1979 paper was incorrect. The elusive hexagonal-planar nickel complex never appeared. Instead, the teams characterised a surprising compound with an intricate scaffold – a polymetallic dinickel cluster surrounded by lithium atoms, sandwiched between rings of a rare kind.

Somehow, the carbon–lithium bonds behaved as ligands, donating two electrons towards the nickel centres, mimicking phosphines, explains Pérez-Jiménez. This was particularly interesting for the Seville team, who specialise in unusual bonds. Together, researchers completed the case with catalysis studies and discovered the potential of nickel–lithium compounds in cross-coupling reactions. ‘The wacky complex in particular doesn’t work, but some intermediates could catalyse interesting reactions,’ explains Borys. ‘Nickel is really special – it activates certain bonds other metals just can’t.’

We’ve now established a new network, something fundamental in science

Both teams counted on different computational experts to carry out simulations, so Campos and Hevia had to coordinate cooperation again. Hevia says Campos’s team ‘were really big-hearted – their calculations encompassed more information, and finished quicker; nevertheless, they waited for us’. For Campos, ‘the Swiss team had results with sodium, instead of lithium, which we hadn’t worked out’. ‘The different expertise enabled the extensive exploration of different aspects of bonding,’ she adds. ‘Thus, the paper is broader, comprehensive, more complete – eventually, this benefited everyone.’

Any lessons learnt? ‘Well, I’m switching to pentane for crystallisations now,’ jokes Borys, who learned this trick from the Campos team. The researchers also envision future collaborations. ‘We’ve now established a new network, something fundamental in science,’ says Pérez-Jiménez. ‘Luckily, the younger generation seems more collaborative,’ she adds. Now scattered around Europe, the three early-career researchers dream of new joint projects, down the (Schlenk) line. ‘It has been a fantastic opportunity to know friendly faces in the field and a lesson for collaboration in the future,’ says Somerville. ‘Indeed, they’ve all formed a very strong bond,’ says Hevia.

After two long years of Covid restrictions and online meetings, Campos and Hevia finally met during an in-person conference in Santiago de Compostela, Spain, earlier this year. ‘We were enjoying one of the conference sessions, when both our phones beeped,’ says Campos. They had received the acceptance letter from Chemical Science, which is published by the Royal Society of Chemistry. ‘We took a selfie and posted it on Twitter!’ Then, they toasted together, to the first of many joint endeavours.

When you think that things cannot get any better #CiQUS10years symposium we have just found out that first joined paper with @CamposGroup has been accepted! @ciqususc #FirstOMany pic.twitter.com/AIP6qdPxpz