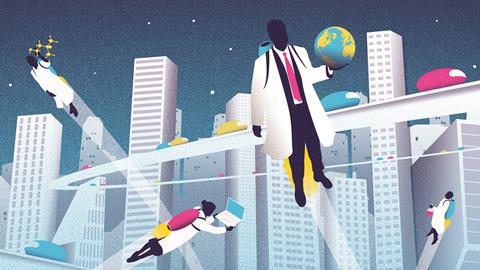 In the future chemists are bound to be in great demand – after all, someone needs to make fuel for our jetpacks.

Or do they? If anything’s rocket-powered in our modern world it’s the speed at which technologies change, and transport’s one of the best examples. The rise of electric vehicles and the promise of self-driving cars are among many forms of disruptive change confronting the modern world. Similarly drastic changes influence both the type of products and services chemists provide, and the tools and methods with which they provide them. Simultaneously, other technologies and industries evolve more slowly, establishing themselves, gaining in importance and maturing.

It’s important for anyone employed in the chemical sciences, to understand how these changes may affect their careers, the skills they will demand and the opportunities they will bring.

Two continuing themes of modern society significantly affect the roles chemists play. First, with humanity becoming ever more reliant on computers, development of hardware, software and computer-controlled equipment has already driven an explosion in what science can achieve. Secondly, globalisation means that chemists and the institutions they work for are increasingly able to collaborate and compete internationally.

This has led to greater specialisation and efficiency, explains Paula Stephan, an economist studying scientific careers at Georgia State University in Atlanta, US. ‘The way that research is done in academic labs has changed tremendously in the last 15 years or so,’ she says. ‘More is outsourced to core facilities at universities or to companies. Furthermore, the equipment in the lab is so much more efficient; you need fewer people to run experiments.’

The prospect of greater automation is typically seen as a threat to opportunities for human chemists. However, Higgins has seen the opposite effect. ‘It’s not “If I put in an automated reaction system, I only need one chemist instead of ten”,’ he says. ‘It’s the other way around. You’ll need 100 chemists, because you’re going to get that many more results to interpret.’

Bartosz Grzybowski, at Ulsan National Institute of Science and Technology in South Korea (Unist) and the Polish Academy of Sciences in Warsaw, foresees automation spreading further beyond the lab. He’s a founder of chemistry decision-making and synthetic planning software startup Chematica, and highlights that chemists are still finding new ways to harness computational power. Grzybowski cites scientists at Haverford College in Pennsylvania, US, who used machine learning to predict reaction conditions that would make vanadium selenite crystals. Taking almost 4000 records of prior experiments, including from old lab notebooks, their algorithm outperformed human experts in identifying successful conditions.[1]

‘Machine learning from our past experience is coming big time,’ says Grzybowski. Consequently, he sees machine learning and maths skills as important for digitally-enabled future chemists. ‘All the analysis, all serious modelling, you cannot do this if you don’t know maths.’

Techniques like those embodied in Chematica could usher in entirely new roles, such as chemical espionage, Grzybowski suggests. ‘If you say to me, “There’s a company in a terrorist state, and they order 100 chemicals from the west – what are they making?”, I can answer that question. That’s because I know all the chemistry through this network we created. If you give me nodes on the network, I can give you points of intersection.’

Thanks to a combination of automation and outsourcing, traditional synthetic and analytical chemistry will decline, Grzybowski predicts, while innovation will focus more on new methodologies. ‘We’re not done in terms of basic mechanisms,’ he says. ‘If you look at what the Wittig reaction enabled, we need more of these breakthroughs. I think there’s enormous potential for discovery there.’

People’s intuition will also probably still be needed in some situations, such as optimising synthetic conditions, he admits. ‘For now I don’t see how a machine that would self-optimise synthetic conditions would beat a human,’ Grzybowski says. ‘Process chemists are going to be gold,’ he adds, unless someone collects their knowledge, like the high-profile Google-powered AlphaGo system did with human game players. ‘When something is a matter of intuition, if you talk to machine learning people, they say that if they have enough data points there is no such thing as intuition.’

Chemjobber, a process chemist working in the US who writes a pseudonymous employment blog, is sceptical about experimental automation’s impact. ‘I have a tough time seeing automation units becoming prevalent without significant drops in cost over the next five to ten years,’ he says. ‘At the moment, I presume that the downtime for these instruments is quite high, as would be the maintenance burden.’ Consequently, he believes that making molecule collections with similar structures in drug discovery, a traditionally important chemistry job, ‘will grow overseas just as much as it will be automated’. ‘In either scenario, it is difficult to imagine how traditional bench chemist numbers will grow significantly,’ he says.

Seeing chemistry divided between making and detecting molecules, Chemjobber predicts diverging fortunes for the different disciplines overall in the next decade. ‘I suspect that, over the next ten years, in developed countries like the US and UK, the number of chemists making new molecules or molecular systems, whether pharmaceuticals or materials, will grow slowly but steadily upwards, at or below the rate of increase of all jobs. The number of analytical chemistry positions, chemists using instrumentation to detect molecules, will grow faster than the rate of increase of all jobs. I imagine that entry-level quality control (QC) chemistry jobs will lessen over the next 20 or 30 years. These positions can be highly routine, and are therefore most likely to be automated.

‘That said, QC jobs will continue to be important – but the amount of wet chemistry they actually do may drop, and the amount of data collection and data analysis will increase.’

One area that Chemjobber forecasts will grow is organometallic chemistry. ‘Most of the new methodologies being developed are organometallically-oriented,’ he says. ‘The chemical and pharmaceutical sectors are doing what they can to take advantage of those advances. I also imagine that there will be more computer-oriented positions, either computationally oriented ones or cheminformatic positions.’

So while Chemjobber is circumspect about which skills future chemists will need, he says ‘a deep understanding of chemical reactivity of transition metals and computers and programming can’t hurt.’

The chemical industry’s structure also affects future employment. That’s one reason why Stephan questions whether investment in PhD training is well spent in the US, where graduate students do a large proportion of university teaching. Once they’ve left academia, many don’t use their specialist training, which she suggests is partly due to a reduction in scientific employment opportunities outside academia. ‘Industry is not hiring like it used to,’ she says. ‘Major labs like DuPont and Bell Labs have gone. It’s definitely where lots of PhDs in chemistry used to go.’ To support her argument, Stephan points to a 2015 US National Bureau of Economic Research study showing companies are now less likely to patent fundamental science.[2]

Higgins suggests that reduced hiring at well-known companies reflects their natural life cycle. ‘The older industries are, the more efficient they have to become,’ he says. He cites the Sabic Wilton plant near Nepic’s offices, which at a capacity of 400,000 tonnes per year is reputed to be the world’s largest single-stream low-density polyethylene unit. ‘It has less than 90 people in it, and I bet you there are hardly any chemists or engineers involved,’ Higgins says.

Nevertheless, Higgins remains optimistic about chemistry jobs, having seen ‘a migration of people into new sectors [such as] low-carbon energy and low-carbon materials, and into new materials like graphene’. ‘There is always this continuum of innovation, and it’s the early stage where you’ll see most chemists employed,’ he says. Opportunities are also emerging to help mature industries adapt to the issues they’ll face over the next decade, Higgins adds, ensuring both financial and environmental sustainability.

‘People have to look at the symbiosis of not just materials, but also heat and energy across whole systems and factories,’ Higgins says. ‘The use of carbon dioxide is a materials symbiosis issue. How can we use that effectively? And if you want to reduce carbon usage, you need more integrated chemical and manufacturing sites. If you’re making polypropylene, you need carpet manufacturers next door. And what do we do with those pieces of carpet and plastic after they’ve been used by the consumer? Can you bring this back into a circular economy? Chemists need to be involved in developing those ideas.’ Higgins also sees new careers for chemists who detect exactly where emissions originate from, as manufacturing plants are increasingly challenged about this.

Balancing the environmental and the economic in this way involves asking some of the most challenging questions that face humanity today. The world will likely turn to chemists for some of the answers and the discipline will continue to play a critical role in progress, Higgins stresses. ‘There’s still a bright future in our profession in determining how mankind will be able to embrace the future.’