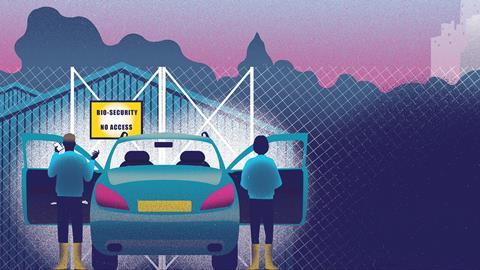 Read the first and second parts of the story

I must have nodded off during the journey, but fortunately Becca was driving. Waking with a start, I saw a set of strip metal gates in front of us emblazoned with a large sign saying ‘Biosecurity: No Access’. Beyond it, low agricultural sheds stood in ranks framed by the green, and possibly toxic, hills of the West Country. We both got out of the car, and I reported our arrival to Emma while Becca made a phone call. Moments later, a scruffy-looking young man came up and unlocked the gate. Becca gave a whoop of recognition, along with a full body hug that left him fighting for breath. ‘John, this is Spike.’ He shook my hand warmly. ‘Any friend of Becca’s is welcome here. Come on, we’re in hut six.’

It was a chicken farm, or looked like one. Hut six was superficially like all the others, but instead of being full of chickens pecking contentedly around on a barn floor it housed a set of facilities unlike anything I’d seen before. We were standing in a glass-walled office, complete with coffee machine and family photos, looking out on a working space about 50 metres long. It was dotted with clusters of machinery and robotics, some of which I recognised from our fabrication plant – but others were custom-built workstations and groups of dramatically hacked old-school analytical instruments. 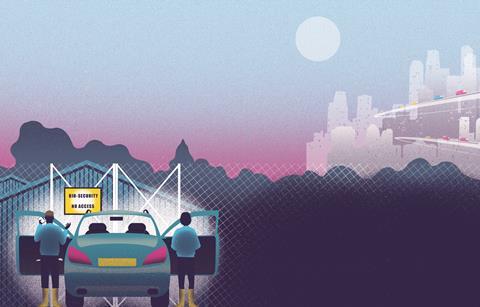 Spike, an engagingly gangly twenty-something with ginger hair, poured us all coffee then waved an arm gleefully around his empire. ‘How do you like it?’ he asked with a grin. ‘Very impressive,’ I replied. ‘But what exactly do you do here?’ He smiled. ‘We specialise in short run fabrications and testing for the more discerning customer. Stuff for specialists, hobbyists, people looking for custom builds that the big boys won’t touch.’ Recreational drugs, in other words. That certainly explained the security and camouflage, along with the obviously high level of investment. ‘Not just drugs,’ Spike explained, in pained tones. ‘We do a lot of stuff for photographers who still want to use silver-based imaging – it isn’t all strictly illegal.’

Once we had explained the scale of our analysis problem, in gross violation of James’ instructions, Spike looked pensive – then surprised. ‘Are you really telling me that no one else in the UK has the capacity to do this? Damn. Things have got worse than I thought! But, yeah, sure – we’ll help. As long as we get – you know – immunity for the other stuff we do,’ he finished with a smile. ‘How many samples did you say? 10,000? Yeah, we can run that through in under a day if I pull in some favours.’

JAMES’S BOSS came close to a fatal coronary event, but did provide the Get Out Of Jail Free card that Spike demanded. Becca and I spent the next day running interference between James, Emma and Spike – helping prepare standards and programming blind repeat samples to check the quality of the analysis. I found myself increasingly impressed by the way the facility operated. I’ve seen certified labs with less real understanding of what they are doing, and Spike’s management was both friendly and effective.

Once it was all over, we had a party, of course. Where James found the funding for it, and the excellent booze, is probably better not examined – but his career was undoubtedly much enhanced by solving the conundrum, as he told everyone who would listen. If he was disappointed that it wasn’t a huge terrorist conspiracy, he didn’t show it – but the truth was almost as surreal. An old military satellite, heavily loaded with exotically doped semicondutors and a thermoelectric generator, had re-entered the atmosphere over the North Atlantic but hadn’t burnt up as effectively as planned. Metal dust had drifted over the western UK, sticking to the fruit and vegetables growing across the country. Those who washed their produce were fine, but those who didn’t died. Just spreading this simple advice prevented any more deaths. The first heavy rain washed the dust into the soil, where it was bound harmlessly to the the same clay minerals I’d been surfing through when the whole saga started. Though testing continues, it seems the way the dust was sintered during high-temperature re-entry in the magnetically active ionosphere made it invisible to the detectors of the National Response Network – but not to our old-fashioned but effective chemical methods. Oh, and guess what? The University has ‘found’ the money we were supposed to be maintaining the labs with – so we’ve got the resources to do some creative rebuilding.

I’ve just opened another beer, and I’m looking across the room to where Spike and Becca are deep in conversation. Hopefully, they are discussing Emma’s offer for the pair of them to create a new undergraduate course that she calls Analogue Chemistry – designed to build a new generation of chemists who can work in the real world rather than VR, and are equipped to handle the unexpected. Personally, I really like the idea, almost as much as I like the look of that impressive government-funded buffet. Now, I wonder if they’ve washed those strawberries?