If you think your new year got off to a bad start, spare a thought for US student Ashley Walker. The Chicago State University chemistry major has been given a fellowship to Harvard University this summer, where she aims to become the first black woman to gain a PhD in astrochemistry. Unfortunately, Walker is dead. 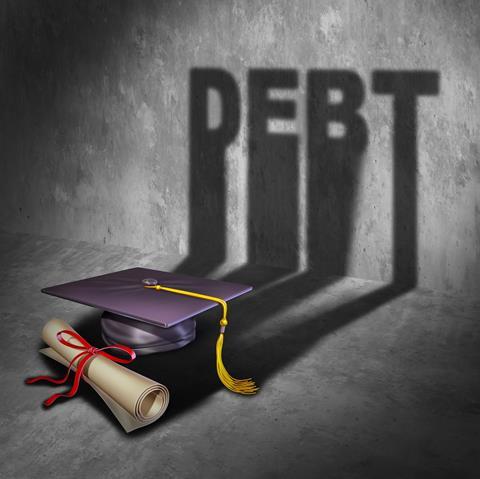 Well, she isn’t. And that’s the problem. Following a social security error, Walker found herself incorrectly declared dead by the US government. Her financial aid was cancelled and all her credit cards were revoked. Trying to get the mess straightened out, Walker started 2017 with the deadline for her tuition looming – and no way to pay the debt. Desperate, she headed to a crowdfunding website to try and get enough money to continue her education – and thanks to the kindness of strangers managed to scrape enough together with four days to spare.

As ridiculous as Walker’s situation may have been, it is fortunately rare. Student debt, on the other hand, is anything but. According to the UK’s Student Loans Company, the average loan balance once you begin paying it back is an eye-watering £24,640. In 2004, the UK government was owed around £15 billion was student loans. By the end of 2015–2016 the figure was £76.3 billion.

The solution to financial woes will depend on personal circumstance. Some may be able to take advantage of support from set ups such as the Chemists’ Community Fund, set up by the Royal Society of Chemistry. I suspect yet more will vote with their feet. If the UK or US price students out of their education, they will look for alternatives – which will, in turn, have an impact on the workforce. SMEs in the UK already list finding good staff their many worry (see below), and unless institutions stop pricing chemists out of their future, it will only get worse.

There are solutions. Increasingly, apprenticeships are being seen as an alternative route in to science. But if the developing world wants to avoid a brain drain, academia, government and industry need to get together and find a long-term solution.

As Walker has proved, her generation won’t take financial setbacks lying down. I suspect that if the grass is greener, they’ll be just as happy to move elsewhere.