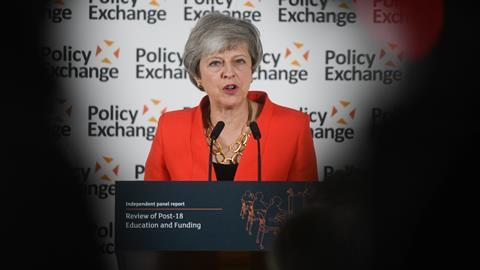 The long-awaited Augar review of higher and further education funding in England could hurt more costly degrees such as science and engineering. The review contains a detailed package of wide-ranging proposals to reform the sector, but if they are adopted the repercussions for universities could be serious as falling tuition fees could result in a sizeable funding shortfall. It is currently unclear – if these recommendations are followed – whether the government would fill this funding gap.

The report’s main recommendations, which apply to students starting in academic year 2021–22, include cutting annual tuition fees from £9250 to £7500. Universities would be able to apply for a government grant to cover the funding gap. It also proposes lowering the repayment threshold from £25,000 to £23,000, increasing what graduates pay each month and extending the repayment period from 30 to 40 years. This would mean lower and middle earners would pay more for their degrees than under the present system. Other recommendations include capping repayments (for every £10,000 borrowed, students would have to pay back £12,000 in real terms); cutting interest rates while studying to the rate of inflation (currently inflation plus 3%); introducing maintenance grants for students from lower-income households (under £43,000); and ending financial support for nearly all foundation years.

Universities’ main fear is that the funding shortfall will not be made up. ‘On the face of it, the fee-level recommendations may look good for students, but unless the government gives a cast-iron guarantee on full replacement funding, it could prove to be a wolf in sheep’s clothing,’ claims Alistair Jarvis, chief executive of Universities UK. The Russell Group of research intensive universities estimates that reducing tuition fees would create a £1.8 billion hole in English university budgets.

The report highlights the importance of investing in science, technology engineering and mathematics (Stem) subjects. However, the Russell Group says that while it is right that government steps in to support these high cost and ‘high-value’ subjects, it must avoid ‘deprioritising’ other disciplines. Over half of students currently choose arts, humanities and social sciences degrees. The Russell Group also points out that domestic fee and grant income is already well below cost for lab-based science, engineering and technology subjects.

Nick Norman, professor of inorganic chemistry at the University of Bristol and chair of Heads of Chemistry UK, warns that chemistry departments will be hit if the government does not fill the funding gap. ‘Budgets are under enough pressure as it is. Most universities will re-distribute funding from lower cost to higher cost subjects in the form of internal subsidies. The irony is that if the government reduces fee income for lower cost subjects, this will harm high costs subjects too unless the government guarantees to make up the difference. And the Treasury is not keen on giving that guarantee.’

Steven McGuire, professor of business and public policy at the University of Sussex, agrees that the Treasury may be reluctant to provide top-up funding. ‘Universities may opt to recruit more international students to help plug the funding gap, or if all else fails, a conceivable outcome, not mentioned in Augar, is to shrink the number of science departments. It’s difficult to square: the report is strongly in favour of Stem but doesn’t come up with any clear solutions as to how to fund it properly.’ At the same time, he says, the report is hostile to the arts and humanities. ‘This puts universities in a difficult position. These subjects are popular and produce some of our most employable graduates.’

However, the timing of the Augar review means it’s unclear whether it will lead to any immediate changes. Martin Lewis, founder of Moneysavingexpert.com and a long-time student finance campaigner, warns that a future prime minister may cherry-pick some recommendations without realising they are interconnected – for example, cutting tuition fees without giving universities the extra grant.

The battle to become the next leader of the Conservative party and, by extension, prime minister adds another dimension to the review. ‘Contenders for the Tory crown searching for a new domestic agenda could, in theory, find what they need in the report, but the electoral saliency of higher education issues is often exaggerated,’ comments Nick Hillman, the director of the Higher Education Policy Institute. By contrast, the Labour party, the official opposition in parliament, supports a policy of no fees. Hillman says the report is an important document that is likely to be referred back to for many years. ‘We may well come to talk about the Augar report as a watershed moment.’

By the numbers: the Augar review

£8.50 billion The total cost per cohort of the Augar recommendations to the government, an increase of less than 1%

£1.46 billion The cost of bringing back maintenance grants

£1.82 billion The funding gap for English universities should fees be cut by £7500