A space traveller's guide to the solar system 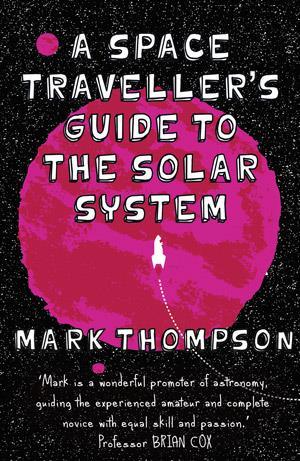 Pack your towel because Mark Thompson will take you on a holiday around our solar system in his new book, A space traveller’s guide to the solar system – a journey that promises to be both terrifying and awe-inspiring.

Of course, the first thing you need for space travel is a spaceship. Thompson guides you through designing your vessel: how to balance weight and fuel, what type of propulsion to use, and how to maintain your physical and psychological well-being on this epic journey. Luckily, your spacecraft will have most of the comforts you would have on Earth, such as (artificial) gravity and even a fruit and vegetable hydroponics garden. Your craft is called Kaldi, named after the Ethiopian goat herder who is said to have discovered coffee – the other fuel that will keep you going throughout your voyage.

Having said goodbye to your loved ones, you set off with your route taking you first to the Sun and then to the inner planets, Mercury and Venus. The Kaldi is fitted with a virtual exploration system that allows you to walk around a planet’s surface without any unpleasant consequences. On Mercury, you will experience for the first time what the sky looks like on a planet without an atmosphere: black even at midday, you see the stars and the Sun, appearing three times larger than from Earth. Venus, however, is an inhospitable place, destroying all spacecraft that have landed on its surface so far within a few hours.

The next leg of your voyage will bring you close to the giant planets – Jupiter, Saturn, Uranus and Neptune. Passing by Jupiter, you get a good view of the Great Red Spot, an anticyclone two times the size of Earth, while ahead of you lies Saturn, the visual highlight of your journey. Thompson is certainly fascinated by what seems to be his favourite planet and vividly describes the beauty of Saturn’s ring system. He even takes you for a stop-over on Titan, Saturn’s largest moon. Here, you might be tempted to take a plunge into its sea, but as it only consists of methane at –180 °C, this might end up being a rather chilly swim.

Overall, Thompson’s book reads like a Lonely planet guide to the solar system – light-hearted, yet rooted in scientific observations. Thompson’s writing is deeply charming and sometimes so matter-of-fact it’s hilarious. Though certainly written for a general audience, Thompson carefully bases the currently impossible journey on cutting-edge research. I highly recommend A space traveller’s guide to the solar system – once I had started, I simply couldn’t put it down.

Purchase A space traveller’s guide to the solar system from Amazon.co.uk