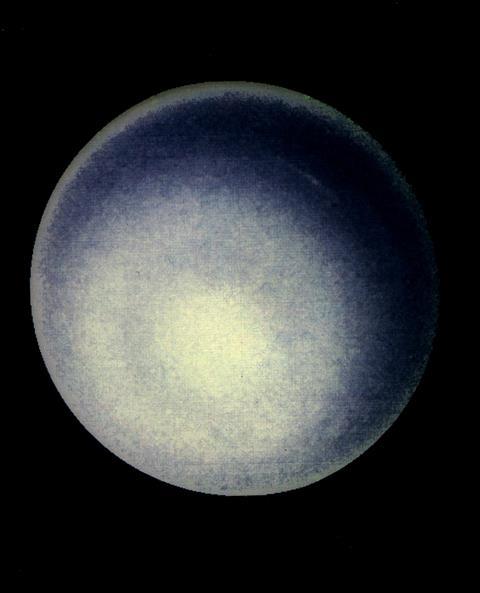 Computer enhanced image of a Nasa Voyager 2 photo that emphasises the high-level haze in Uranus’s upper atmosphere. Clouds are obscured by the overlying atmosphere

The giant ice planet Uranus’s clouds smell like rotten eggs, data from the Gemini Observatory in Hawaii has revealed. The gas responsible for the odour, hydrogen sulfide, has been identified as the main component of the planet’s upper cloud layer.

For a long time, scientists were puzzled by Uranus’s continuum microwave adsorption spectrum – it was missing a component that atmospheric models couldn’t account for. Now a team of researchers from the UK, US and France have for the first time unambiguously identified the source of the planet’s spectrum disturbance as hydrogen sulfide.

The team simulated infrared spectra for different gases known to exist on Uranus – methane, hydrogen sulfide and ammonia – and matched them with the observed signals. Only the hydrogen sulfide spectra gave a perfect fit. The team estimates the planet’s cloud tops to contain around 0.5ppm of the smelly gas and lower clouds to be made up mostly of hydrogen sulfide ice.

Only Uranus’s northern polar region didn’t show strong H2S signals, which could either mean the gas is absent from this region or that tropospheric haze masks its spectrum – a question the scientists hope to explore further.