In a kitchen somewhere in Newcastle, a woman washes up after baking cottage pie. As she angles the largest dish into the sink, she catches a glimpse of herself in a mirror on the opposite wall. But the mirror holds more than just her reflection – behind its silvered surface, a team of scientists is watching her every move. For this is a test kitchen in P&G’s Newcastle Innovation Centre, and in detergent development, nothing is left to chance.

Creating these unassuming products involves a complex web of scientists, suppliers and customers, and takes years of work and millions of pounds. Winning Chemistry World’s science communication competition gave me a glimpse into this world, as I embarked on a whirlwind tour of two related sites.

Before encountering the test kitchen, my first stop was Stenungsund, a postcard Swedish village. Nestled in its rolling hills are AkzoNobel’s surface chemistry labs, where new detergent chemicals are developed. 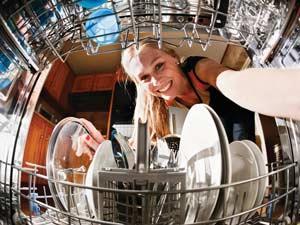 White goods can be black boxes when it comes to chemistry

Jérôme Mercanton is researching polymers. He explains that they are used in detergents to prevent unsightly, white films forming after a wash. These crystal films are produced when surfactants react with ions in hard water. Typically, polycarboxylates, such as polyacrylic acid are used, which prevent film formation by sequestering the ions and interfering with crystallisation by coating and dispersing the crystal particles.

In the past, when phosphate surfactants were used, these films weren’t a problem. But those chemicals are linked to eutrophication and so have been phased out, meaning the role of polymers has increased. But there’s a downside: the polymers aren’t biodegradable, and their building-block monomers come from unsustainable petrochemical feedstocks.

Product development is a juggling act on a tightrope

This is because polyacrylic acid tends to curl in on itself due to hydrophobic interactions, hiding some of its functional groups. The starch backbone reduces this curl, which makes the hybrids just as efficient, while being more biodegradable and sustainable.

But making these developments is far from straightforward. The product’s performance is just one aspect in a complex network of forces that scientists like Mercanton must balance – it’s a juggling act on a tightrope. The whole lifecycle of a product ‘from cradle to grave’ has to be kept in mind, which incorporates the transport of raw materials and the overall carbon footprint. Mercanton says that the hybrid polymers score well in this area – every tonne of acrylic acid it replaces reduces carbon emissions by half a tonne. However, using starch may put pressure on the price of grain, which also depends on the future demand for grain-based fuels.

If the balancing act works, then AkzoNobel’s chemicals eventually find their way out of the lab and into their customers’ brand-name products. But even then, its scientists remain in constant communication with these customers – helping to fine tune and troubleshoot formulations. This is Anette Thyberg’s area and, as she explains, there’s no such thing as a one size fits all formulation. 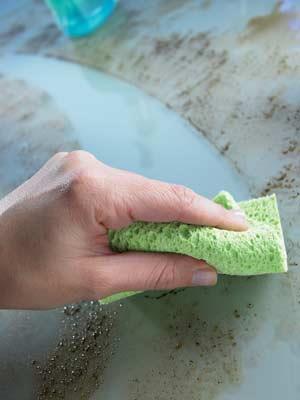 Every product is different, says Thyberg, depending on what’s dirty, what the dirt is and how it’s being cleaned. For example, an automatic dishwashing detergent is wholly unlike a car wash detergent. Formulations are also country specific: each country has different water hardness levels, uses different appliances and eats different foods – leading to different stain profiles. Making matters more complicated, different regulatory regimes and religious practices must also be respected. In India, for instance, soaps cannot be made from beef tallow. Formulations can even be seasonal – in winter, car dirt tends to be more hydrophobic and so car wash formulations must use more hydrophobic molecules.

One of AkzoNobel’s customers is P&G, and my next stop was its Newcastle Innovation Centre – a warren of offices and laboratories. The focus here is automatic dishwashing and laundry detergents, and senior technologist Neil Lant is always on the lookout for new ideas.

Lant scouts for innovations, such as Mercanton’s hybrid polymers, that can be incorporated into P&G’s products. His vast network includes global companies, as well as universities and start-ups. He even works with fashion designers to make sure that novel fabrics and designs are machine-washable.

Besides polymers, Lant’s other main area is enzymes. He says that the most sought-after enzymes are those that work at lower temperatures, or that are selective on tough stains, or which ‘polish’ – which means modifying a material’s surface to make it more resistant to stains. One of P&G’s latest developments in this area is Whitezyme.

Whitezyme polishes cellulose – the most common fibre in fabrics – by increasing its microporosity. As gaps between the yarn fibres increase, stains are retained less easily. Importantly, the treatment only affects amorphous cellulose, which is associated with stain retention, and doesn’t affect the crystalline cellulose that gives the fabric its strength.

Whitezyme was developed from an enzyme isolated from the bacterium Paenibacillus polymyxa but Lant explains that the parent enzyme is vulnerable to deactivation so it has to be modified to increase its stability in detergent solutions. P&G’s formulators worked hand in hand with the enzyme’s supplier, Novozymes, to alter substituents involved in the enzyme’s unfolding pathway, while retaining its polishing properties.

Appliance manufacturers add yet another strand to the web – they have to make sure their products are compatible with new detergents. So in Graeme Cruickshank’s lab, test tubes and beakers are replaced by rows upon rows of washing machines and dishwashers.

Cruickshank likens the appliances to reaction vessels, but with a catch – no two cycles are the same. This is particularly true for modern appliances, which automatically change the wash conditions. The result is that in washing, complex chemistry is taking place in uncontrolled conditions.

So Cruickshank must use an arsenal of techniques to unravel each wash cycle, which includes sensory fabrics that indicate exact directional shear forces. He also uses one millilitre and one litre ‘washing machines’ to test formulations at early stages of development.

The customer is king

Reigning supreme in the stakeholder web, though, are the consumers, who can render all this work pointless if a product doesn’t meet their needs, wants and even whims. And so we arrive in the mirrored test kitchen, where senior scientist Gill Hardy and her team learn how consumers interact with, and react to, new products. 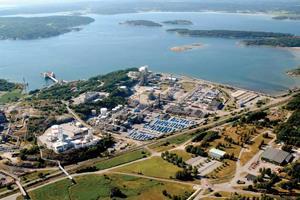 Hardy explains that the kitchen allows her team to observe exactly how consumers clean, how they store the detergents and how they respond to different smells and textures. The scientists can even direct the action through loudspeakers if necessary. And these days, webcams can turn consumers’ own home kitchens into test labs, providing data on a global scale.

But consumer perception is complex and inexact, involving sensory, psychological and sometimes irrational factors. For example, many detergents have coloured speckles in an otherwise white formulation. Hardy confides that there’s normally no reason for the colour, but buyers associate speckles with a more effective detergent. Smell is another example: certain scents are associated with qualities such as ‘soft’, ‘natural’ and ‘fresh’, which brings perfumers into the mix.

Consumers can also be suspicious of change – which makes development even more challenging. When P&G tried a sustainability-driven switch to more concentrated powders, shoppers thought they were being cheated. In fact, much of the powder in a typical detergent is just bulking agent.

It’s a challenging industry, but that’s all part of the appeal for the chemists involved. Lant says that detergents give him the same job satisfaction as his previous role in cancer research. He relishes the race between competitor companies and loves seeing his ideas transform into products on the supermarket shelf.

A recurring motivation for the scientists is helping consumers in developing countries. As formulation technologist Alan Booker puts it, he gets to make small differences in meaningful ways, such as freeing up hours that would otherwise be spent hand-washing. Sometimes the differences can be huge – technology originally developed by P&G to recycle laundry water is now being used to provide safe drinking water.

According to Booker, the hardest part of the job is killing a product. And it’s easy to see why. After years spent in research and development, negotiating the intricate web of stakeholders and balancing economics, energy and the environment, it must be hard to see the effort come to naught.

Back in the test kitchen, the scientists edge forward. Do they have a new product on their hands, or is it back to the drawing board?

Tessa Fiorini is the winner of the 2013 Chemistry World science communication competition.