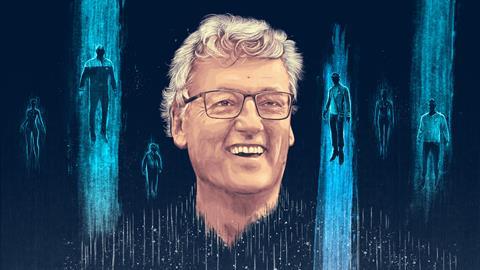 In situ with David MacMillan

The Nobel prize-winner on the joys of handing out his medal to everyone, chatting with William Shatner and Alex Ferguson, and the pain of being a Scottish football fan

David Macmillan is the James S McDonnell distinguished professor of chemistry at Princeton University, US. In 2021 he and Benjamin List shared the Nobel prize in chemistry for their independent work developing asymmetric organocatalysis. In 2022, he was knighted for services to chemistry and science.

When I was 10 years old, I thought I was going to be a steelworker. My brother was the first person in our family who decided to go to university. It was very controversial. My mum and dad thought he was being lazy for not wanting to join my dad in the local steelworks. Then, when he graduated, he got a job that paid more money than my father was earning after 30 years as a steelworker. At that moment, my mum and dad decided that I had to go to university.

The last time I ran an experiment in the lab was the summer of 2002. I decided that I was going to show these young punk students how to do it. Before I knew it, I had seven or eight people running around after me because I didn’t know where anything was (imagine an operating theatre). I was absolutely wasting everyone’s time. I set up the reaction, and then I got really busy and never came back to deal with it. It just sat there for days. It was really embarrassing!

We have problems we’ve been working on in my group for 15 years that we still haven’t solved. But if they work, it will be incredible. Even if you’ve no idea how to do something, if you think ‘wow, if that could happen that would be huge,’ then that’s a great litmus test for saying, ‘yes, that’s a good problem to work on’.

The average scientist deserves so much more credit than they actually get. I think of science as the most noble field, because academic scientists work really hard and generally don’t get paid particularly well. They’re doing it because they have a love of science, and they care about leaving the world in a better place than the way they found it. I think it’s a real shame that society, in some political ways, is pushing back against scientists.

For the record, my medal has only been dropped twice. So far, no dents

William Shatner, who played Captain Kirk in Star Trek, interviewed me. Then he contacted me later to ask if he could chat with me again. One of the things he asked me during that second conversation was ‘David, what is a photon?’ And I thought this was crazy – Captain Kirk wants to know what a photon is!

The most fascinating person I’ve talked to is the football manager Alex Ferguson. He called me up to ask me if I would have dinner with him. We hung out for about four hours, drank a lot of wine. He has a very compelling intellect. You can understand why he was such an incredible manager. He understands psychology really well, but he also understands history really well, while having very classic Scottish working-class sensibilities.

We’re born to suffer, we Scottish football fans. Scottish teams basically never win, by definition. It’s so painful. But that makes it amazing when they do well. You have to go through all the suffering to have some enjoyment now and again.

I support a football team called Rangers, who got to the final of the Europa League this year. They played a German team called Eintracht Frankfurt, which happens to be the team that Ben List supports. The chances of these two teams playing each other in a Europa League final was pretty non-existent. I would say the chances of me and Ben List winning a Nobel prize and our respective teams playing each other in a European final in the same year, well that was nuts. Of course, Eintracht Frankfurt won.

I love really terrible television. Like Downton Abbey. I love Downton Abbey. I mean, who would ever admit to that? Sometimes at the end of the night, it’s great to sit down and watch something that is just undemanding and calming, let it just wash over you and relax completely.

We take the Nobel medal everywhere we go. On flights we just throw it in the luggage. One of the most fun things in life is to see people’s reactions to it. When you give people the medal they are almost scared to hold it, which I find pretty funny. It’s like a Lord of the Rings thing. In seriousness, I like to demystify the medal and I hugely enjoy people getting to be part of something that is quite rare. For the record, my medal has only been dropped twice. So far, no dents.

I’m convinced that if I have enough people hold my medal, that someday someone’s going to win a Nobel Prize who held this one. That would be really cool, if someone says, ‘Yeah, I held MacMillan’s, Medal because he was going around the world handing it out to people’.

People always want to take photographs with you. But you soon realise that the medal and the prize is the real celebrity. In 40 years time, who wants to show their grandkids a picture of me? The medal however, that’s a different story.