Drugged: the science and culture behind psychotropic drugs 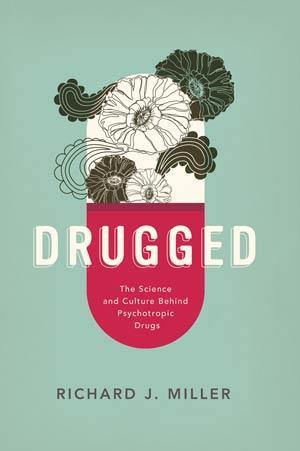 Psychotropic drugs – compounds that alter our perception and consciousness – fascinate us. They have left a lasting impression on our culture and history, securing their place in everyday life – think caffeine or alcohol. However, psychoactive drugs have also played a crucial role in enhancing our knowledge of the brain’s inner workings and transformed our understanding of mental disorders.

Richard Miller, a pharmacology researcher at Northwestern University, US, and a medical humanities and bioethics professor, has written his first popular science book on the chemistry and culture of psychoactive compounds. In Drugged, Miller combines his enjoyment of the topic with scientific rigour when it comes to presenting facts and explanations. Having published several hundred journal articles, Miller’s style is certainly influenced by academic writing, but the book makes for a pleasant read. Although individual chapters discuss distinct compounds or groups, Miller frequently references previous content, creating an overarching narrative rather than a glossary collection to dip in and out of.

Drugged is an expert mix of scientific history, chemical, biological and medical facts, along with some sociocultural background. The book starts off with a chapter on the mushroom-derived muscimol and other entheogens – hallucinogenic chemicals are thought to have played a significant part in the development of early religions. Chapters on LSD and opiates showcase what happens when a compound’s medical and recreational uses collide, while others delve into how the understanding of a drug’s hallucinogenic mechanisms advance pharmacology. It is a real shame that the fascinating paintings Miller shows (such as Henry Fuseli’s The nightmare) alongside a 19th century letter describing the use and misuse of opium are printed only in black and white – they would have been even more impressive in colour.

Some chapters discuss whole compound classes – namely antipsychotics and antidepressants (such as fluoxetine – better known as Prozac) – whose stories are inevitably intertwined with the rise of the medicinal chemical industry. Miller uses the chapter on barbiturates and benzodiazepines to explain the structure and function of the all-important GABAA receptor – a chloride ion channel that is targeted by many psychotropic compounds.

In the book’s final third, Miller discusses cannabinoids and methylxanthines (eg caffeine), as well as cocaine, amphetamines and nicotine. I think some of these latter compounds would certainly deserve a chapter of their own.

Although intended for a general audience, a basic knowledge of chemistry and biology would certainly make Drugged an easier read. While Miller explains terms like decarboxylation and chirality, some might find chemical structure drawings with relatively little explanation and highly condensed biochemistry difficult to swallow. Nevertheless, I strongly recommend Drugged to the curious reader.  The book gives a captivating insight into the interplay between neuroscience, pharmacology, history and culture.

Purchase Drugged: the science and culture behind psychotropic drugs from Amazon.co.uk