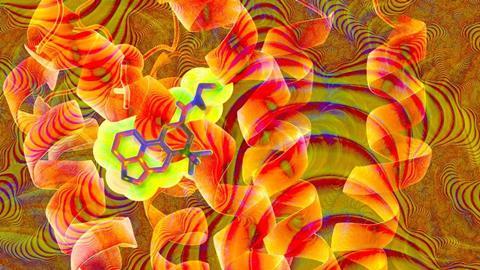 A newly revealed crystal structure of LSD bound to a human serotonin receptor could explain the hallucinogen’s high potency and long-lasting effects. It is the first such structure of a psychoactive drug bound to one of its biological targets and could provide crucial insights for scientists trying to develop new treatments for serious mental disorders. 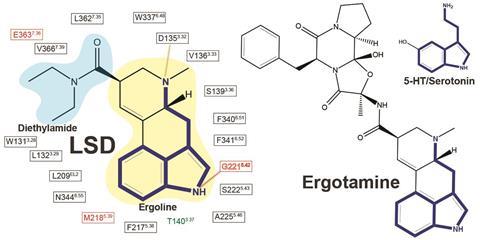 The study was led by Bryan Roth of the University of North Carolina, US. He points out that numerous musicians, artists and even technological innovators such as Steve Jobs, of Apple fame, and Kary Mullis, the Nobel prize-winning inventor of the polymerase chain reaction, have claimed that LSD had inspired their work. Yet, the way in which this powerful drug acts on the human body is still something of a mystery.

‘It’s a very interesting compound. And the reason we’re so interested in it is that we want to understand, at the most fundamental level, how it is that such a simple chemical can have such profound effects on how people view reality,’ explains Roth. ‘So what we set out to do was to see if we could obtain a molecular picture of LSD acting on one of its receptors, and that’s basically what we achieved.’

The new study shows that once bound to the serotonin receptor, an LSD molecule is secured in place by a lid-like structure.1 This could explain why small doses, as low as 50–100μg, can induce a psychedelic experience lasting for 18–24 hours, sometimes longer. Another study published today shows that excessive stimulation of the receptors explored in this work by LSD, influences peoples’ interpretation of the world around them and their sense of self.2 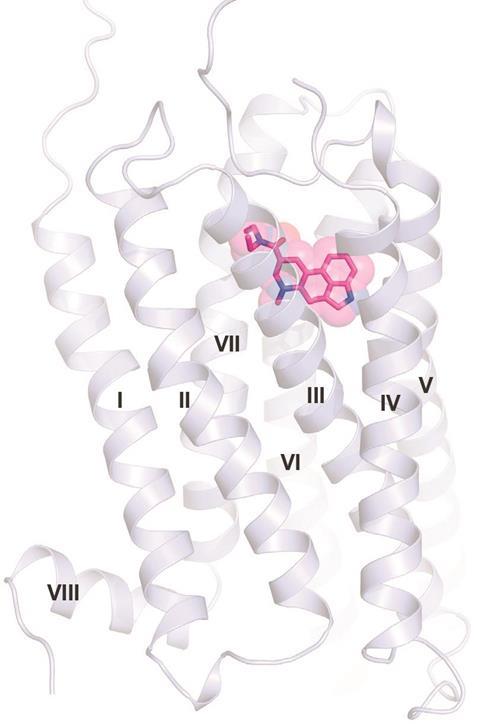 Graphical representation of LSD bound to its receptor

Getting a handle on acid

‘If you think of the pocket in the receptor as a hole and LSD as a person, it sort of jumps in the hole and then it pulls the lid over the top of the hole and holds onto a handle – an amino acid – that connects to the lid, basically holding it down,’ explains Roth. ‘So that, and the associated studies that we did, explains to a great extent why the drug is so potent and why it’s so long-lasting. Basically once the receptor gets hold of LSD it grabs onto it and doesn’t let it go for hours, literally.’

Roth’s lab had been working on this project on and off since the early 1990s. Back then, they struggled to purify large enough quantities of the receptors and even if they could obtain microcrystals, the tools didn’t exist to solve the structures. But in recent years, advances in protein-crystallisation techniques and modern beamline technology have made what was once thought impossible, possible. 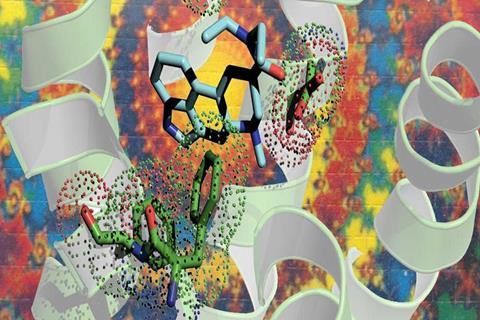 This image shows an artistic representation of LSD (blue) fitting into a serotonin receptor (the white ribbon).

Michel Bouvier, the chief executive of the institute for research in immunology and cancer at the University of Montreal in Canada, is an expert on G-protein coupled receptors and is impressed by the work. ‘This first structure of a potent hallucinogenic drug bound to one of its molecular targets provides important insight on the molecular basis underlying the action of this drug.’

Noting the large number of interconnected central nervous system receptors that LSD binds to, Bouvier points out that a single study can’t fully explain the drug’s complex psychoactive actions. However, he adds that the new research is an important step towards understanding LSD’s mechanism of action at the atomic level and ‘opens the path for the structure-based design of functionally selective drugs targeting 5-HT receptors’.

This is something that Roth is keen to explore. ‘Now that we have the structure, we can begin to create drugs using structure-based drug design that mimic certain actions of LSD and not others,’ he says. ‘Then we can bring them forward and see if they maybe have the benefits of drugs like LSD without all these side effects. So ultimately we’re hoping that all of this information will allow us to make more effective medications for people with serious psychiatric disorders.’