Portable drug-detection device can send results directly to a smartphone 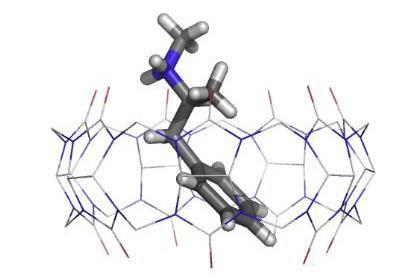 Amphetamines can now be detected quickly and easily in urine samples using a new device that has a synthetic receptor that can bind drug molecules. The portable sensor could enable on-site testing, and can even send results straight to a smartphone.

Identifying drugs in biological samples can be a slow process, requiring expensive equipment and analysis by trained professionals. But a new system developed by scientists in South Korea allows amphetamines to be detected in seconds without the need to send samples to the lab.

‘By combining the strengths of molecular recognition and the sensitivity of an organic transistor device, we have developed the first amphetamine sensor that can detect minute concentrations from a single drop of biological liquids in real-time,’ says Kimoon Kim of Pohang University of Science and Technology, who led the project.

The sensor is made of ring-shaped cucurbituril molecules placed on top of a water-stable organic semiconductor. Amphetamine-like molecules bind to the cucurbituril unit altering the distribution of electrons across the molecule. This changes the movement of electrical charge across the semiconductor allowing the detection of amphetamines at picomolar concentrations in water, and at nanomolar concentrations in urine. Kim believes that it may also be possible to extend the technology to analyse saliva and sweat. 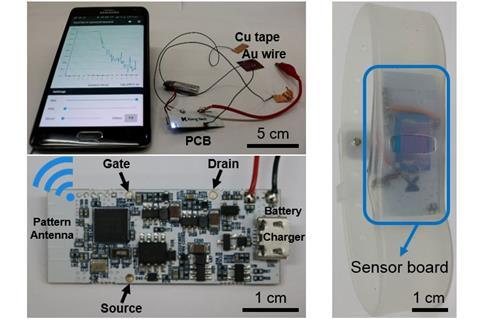 The newly developed amphetamine sensor can interface with a smartphone to deliver results straight to it. The sensor consists of a highly sensitive organic transistor coupled with a synthetic amphetamine receptor

The researchers showed that the sensor can be combined with a circuit board just a few centimetres long that contains a battery, antenna and a micro-USB charger. This portable system can be embedded in a bracelet, and allows results to be sent via Bluetooth to a smartphone.

‘Cucurbiturils were recognised as macrocycles with enormous potential 15 years ago, but these new amphetamine sensors constitute one of the first hands-on applications,’ says Werner Nau, an expert on supramolecular chemistry at Jacobs University in Bremen, Germany. ‘The exceptional binding selectivity and affinity of these cucurbituril units for aromatic ammonium ions was known before, but that it can actually be converted into a picomolar analyte sensitivity comes as a pleasant surprise,’ he adds.

Kim notes that it is difficult to distinguish between different amphetamines with the current system. However, as each amphetamine-like molecule shows a unique response to the device, this might be achievable in the future. ‘We anticipate that if we fabricate sensor arrays with multiple different cucurbiturils, it may possible to distinguish between them. We are currently working along this line,’ he says.