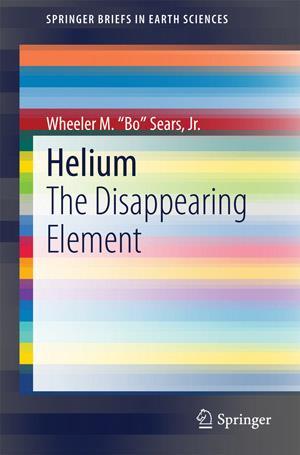 ‘Two splendid protuberances appeared – one of them … shone of a splendour which is difficult to imagine,’ said the French astronomer Pierre Janssen after looking at the solar eclipse of 1868 through his rudimentary spectroscope in Gundar, India. He, along with several other astronomers on the Indian expedition, had stumbled across the D3 line. Unremarkable to the naked eye, this solitary spectral signature was, in fact, the solar fingerprint for helium.

This monumental discovery forms a small part of Bo Sears’ new book, Helium – the disappearing element, and it’s a shame the historical narrative the author paints does not take up more page space. From the very nature of helium and its astronomical discovery to its role as the fuel in the engines of stars and its terrestrial applications, Sears covers a truly staggering amount of ground in this rather short book from the Springer briefs series. Much like the element itself though, this treatise, in trying to be a popular science, historical and academic text, ends up being pretty lightweight.

It certainly makes for an odd dichotomy, as the subject matter is undeniably fascinating. The author waxes lyrical about how the US’s monopoly on helium production led to Germany replacing helium in their zeppelins with hydrogen – the tragic consequences of which are evident in the Hindenburg disaster of 1937. As an expert in helium exploration and production, Sears also delves into the litigation that mired helium’s progress as a crucial resource in the latter half of the 20th century with fervour and detail. On first glance, I wouldn’t normally find such legal matters all that interesting, but the author manages to paint a dramatic picture.

Even though helium is the focal point of the text, the book itself does not feel terribly focussed and, at times, it becomes very conflicted. The author drifts between scientific disciplines, including astrophysics, nuclear physics, chemistry and even geology, but without producing a coherent narrative.

Sears also goes to painstaking lengths to simply define some scientific terms, such as fission, energy and light, only to jump into incredibly complex concepts – advanced nucleosynthesis or the Sun’s proton–proton cycle, for instance – without enough of a preamble. And I can’t help but highlight the alarming number of grammatical errors.

Helium – the disappearing element delivers a whistle-stop tour of the element’s history and its scientific importance in space and on Earth. But the book is littered with so many inconsistencies and its brevity comes at the cost of depth, which is not reflected in the rather hefty price tag, that I don’t think it will be rising up into the literary stratosphere any time soon.