As the 20th century matured, chemists had the satisfaction of being able to look back on a long and hard fought battle they had decisively won. For hundreds of years, chemists had been involved in the ambitious task of identifying and extracting, in a reasonably pure state, all of the naturally occurring elements on Earth. But, even before the finish line came into sight, the challenges confronting chemists had begun to mount. 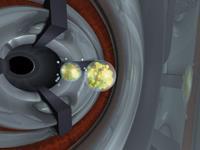 Looming ever larger was the problem that, as the elements became heavier, their concentrations in rock specimens were falling precipitously. As far back as the turn of the century, Pierre and Marie Curie had spent four years (1898-1902) working their way through several tonnes of pitchblende ore to extract a mere decigram of radium.

In 1971, at the University of California, a team headed by Darleane Hoffman extracted 8? 10-15 grams of plutonium from a natural bastnatite ore. The initial concentration of the element had been less than 10-18 grams of plutonium per gram of ore.

The team had chanced upon the remnants of the plutonium left over from the nucleosynthesis of the terrestrial elements that occurred some five billion years ago. This achievement highlighted that virtually no traces remain of the elements beyond uranium. Their intense radioactivity has been responsible for their almost total decay.

For serious scientific examination, these elements would need to be artificially synthesised. A device, known as a cyclotron, that was invented in the 1920s made this possible. In the cyclotron atomic nuclei can be bombarded with neutrons or other nuclear fragments with the aim of fusing the target nuclei and bombarding particles.

Modelling the atomic nucleus has been surprisingly difficult and there is still no definitive theory on how protons and neutrons interact to form a nucleus. Predicting the properties of elements thought to be suitable candidates for synthesis has therefore often been far from straightforward. Moreover, because unequivocally successful syntheses have been comparatively few and far between, the overall discovery rate of new elements has declined in recent decades.

The number of new synthetic elements that remain to be synthesised is probably quite small. Determining that number is difficult. Calculations have been performed for over 70 years using a variety of atomic nucleus models to try to get reliable estimates of the stability of different nuclei. The answers obtained, however, depend very much on the model used.

There are currently two principal models: the charged liquid drop model and the nuclear shell model. The charged liquid drop model has served well in the past but it has been discredited in predicting the ultimate size of the periodic table. It suggests that repulsive interactions between the nucleons in the nucleus become so great by the time element 106 is reached that all of the succeeding elements will be completely unstable.

When these shells are either full or half-full, the nucleus exhibits notable stability. The proton and neutron numbers corresponding to stable shells - the so-called magic numbers - are thought to be 2, 8, 20, 28, 50, 82, 114, 126, 138, 152 and 164. At the high end, these numbers become progressively uncertain, however, because of the confounding presence of spin orbit coupling, distortion of the nuclei from sphericity and relativistic effects.

But it is the promise offered by this theory that continues to drive the search for new elements. As a leading researcher in the field, Sigurd Hofmann, succinctly put it: ’The idea of superheavy elements was born and a rush to find them began.’

The rush may be on, but in terms of actual results the whole enterprise appears to have proceeded at a rather leisurely pace. The first synthesis of an element occurred in 1937 when Carlo Perrier and Emilio Segr? in Palermo, Italy, succeeded in separating technetium from a sample of molybdenum metal that had been irradiated with deuterium nuclei. Since then 27 other elements have been synthesised - a production rate of one element for every 2.4 years.

A word of caution is perhaps called for concerning the use of the word element in this context. Synthetic elements are rarely generated in quantities sufficient for them to be bottled. Elements instead often mean a small number of nuclei formed during an irradiation process that are so unstable they break down within a fraction of a second. This is often not long enough for them to acquire a full complement of electrons to become complete atoms.

The situation has been well summed up by Paul Karol, a heavy element researcher based at Carnegie Mellon University in Pittsburgh, who commented that ’the legitimacy of considering the chemistry of hypothetical elements with basically zero lifetimes is questionable’.

Questionable or not, new element synthesis calls for a huge investment in sophisticated technology as well as human ingenuity. On the technology front, three major items are needed - a cyclotron to enable accelerated beams of ions to be smashed into nuclear targets, a separator to filter out the desired product species and discard everything else, and a detection system that is able to record all the nuclear events that occur during an experiment.

Three teams currently dominate the scene: one based at the
Lawrence Livermore National Laboratory, US, the natural successor to those led for many years by Glenn Seaborg; another, which had its beginnings in the 1950s, based at the Joint Institute for Nuclear Research in Dubna, some 100 km north of Moscow, Russia; and a team that began to make its presence felt only in the 1980s, located at the Gesellschaft f?r Schwerionenforschung (Society for Heavy Ion Research) in Darmstadt, Germany.

The teams work in close collaboration. This is well illustrated by the discovery of the elements 113 and 115, announced early in 2004. The project was carried out under the auspices of the Russo-American Joint Coordinating Committee for Research on Fundamental Properties of Matter and the announcement was authored by 26 scientists, made up of 18 Russian scientists, headed by Yuri Oganessian, and eight US scientists, headed by Kenton Moody.

The reaction studied involved bombarding 243Am with an intense beam of 48Ca ions. The americium target was prepared by the US team and then irradiated in the Russian U400 cyclotron in Dubna. Four atoms each of the new elements were synthesised according to the following reactions.

The half-life of the 288115 isotope was 87 milliseconds and that of 284113 was 480 milliseconds. The experiment succeeded because of careful design: the irradiation consisting of a beam of neutron-rich 48Ca ions was conducive for stable product formation and the beam energy (248 MeV) was appropriate for the two nuclei to fuse but not to break apart by fission.

Because so many things can go wrong in synthesising new elements, every claim needs to be verified, by being reproduced by another team, before it is accepted.

Elements 113 and 115 may well be verified by the team in Darmstadt, or possibly by smaller groups, such as those based at the Institute of Physical and Chemical Research in Saitama, Japan, or at the Grand Accelerateur National d’Ions Lourds in Caen, France.

The outcome is not necessarily a foregone conclusion. In 1999 a US team, headed by Ken Gregorich, claimed it had made an isotope of element 118 by bombarding a lead target with krypton ions according to the following reaction.

This event caused shock waves to ripple through the nuclear synthesis community and many earlier claims were checked. As a result, all elements up to 116, apart from elements 115 and 113, can now be regarded as synthesised beyond any reasonable doubt. Element 118 has since been claimed by the Russian team but has so far not been confirmed.

Creating elements higher than 118 will be an uphill battle. Workers are pinning their hopes on the existence of so-called ’islands of stability’ within a sea of elemental instability.

Nuclei with a magic number of either protons or neutrons are thought to have a greater stability than that of their neighbours. And nuclei having both their neutron and proton counts equal to magic numbers are regarded as being exceptionally stable.

Among the synthetic elements, the first to possess a magic number of protons is element 114. Recent theoretical work by Robert Smola n czuk at the Soltan Institute for Nuclear Studies in Warsaw, Poland, confirms many earlier predictions that element 114 should be fairly stable, especially the doubly-magic isotope containing 184 neutrons.

The latter has not yet been made, but the nearest so far (289114) has a half-life of 21 seconds which is long in comparison to those of nearby elements whose half-lives are typically measured in milliseconds. Isotopes of element 114 with a larger number of neutrons will almost certainly exhibit greater stability.

The stability has not been as pronounced as many theoreticians had initially hoped and it is now clear that new syntheses will be achieved only by pushing the technology to its ultimate limits. The next island of stability can be expected at, or near, element 126, although theoretical uncertainties loom large for extrapolations into unknown territory.

The consensus seems to be that magic numbers, which characterise the closure of nucleon shells, will become increasingly irrelevant and that instead comparatively broad areas of shell stabilisation will be encountered.

Experimentally, this suggests that it may prove possible to synthesise elements up to around 126, although only a few atoms of each, and that elements 114 and 126 might be connected by an isthmus of stability.

Synthesising elements around other conjectured islands surrounding elements 164 or 184 would seem to be completely out of the question, certainly with our current know-how. For the foreseeable future, the best we may be able to do is to make minuscule amounts of elements up to 126 and - with some luck - reach as far as element 130.

Dennis Rouvray is chemistry professor at the University of Georgia, Athens, Georgia, US