The use of nitrogen instead of compressed air for inflating vehicle tyres can save lives and money, according to latest figures from UK motoring organisation the RAC.

The use of nitrogen instead of compressed air for inflating vehicle tyres can save lives and money, according to latest figures from UK motoring organisation the RAC.

The RAC reports that six per cent of all fatal motorway accidents are caused by the sudden failure of under inflated tyres and 90 per cent of all tyres are incorrectly inflated. The properties of nitrogen make it an ideal gas for keeping tyres correctly inflated. Its diffusion rate through rubber is one third that of compressed air, resulting in a lower pressure loss between fillings. 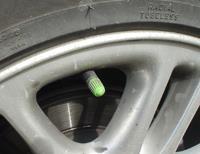 And nitrogen-filled tyres hold an economic advantage, reports fleet operator James Lister and Sons, which trialed the technique for a year. The company runs 95 vehicles, and says that tyre replacement costs during the trial were down by 15 per cent because of reduced wear. The savings amount to ?2000, which has already covered the cost of the nitrogen generating equipment. From now on, reports the company, there are no extra costs, and safety is enhanced.

Equipment to replace standard air pumps has been developed by UK company Parker Filtration. The diffusion rate of nitrogen compared with a typical air mixture is the basis of static separators being marketed by the company.

The separators are based on hollow fibre membrane technology. The membranes consist of cylindrical fibres, with a typical inner diameter of 0.3mm, packed into steel tubes. The tubes are assembled in a variety of configurations depending on the required output.  Pressurized air is supplied to the inlet of the assembled unit, whereupon hydrogen, carbon dioxide, oxygen, helium and water vapour diffuse quickly and escape, leaving a 91 per cent nitrogen-rich gas.

This gas is then used to inflate car tyres.  The absence of oxygen and water vapour also reduces corrosion of the rubber and steel rims which, alongside better pressure maintenance, leads to a longer tyre life. Fabian Acker