16 September 2005: Air bags come to the aid of nuclear power

US chemists have used the propellant in car air bags to create some of the first stable uranium nitrides.

US chemists have used the propellant in car air bags to create some of the first stable uranium nitrides. Studying these compounds could help develop improved nuclear fuels and novel methods for dealing with nuclear waste.

Researchers had previously synthesised a few insoluble uranium nitride compounds, but in fairly small quantities and containing various impurities. This has prevented study of the compounds in any great detail.

Chemists from the University of California, Irvine, led by William Evans, were investigating the reduction chemistry of the actinide elements (from actinium to lawrencium, including uranium) when they created a variety of organometallic uranium complexes.

They discovered that by reacting one of these complexes - [(C5Me4R)2U][(?-Ph)2BPh2] (where R = Me or H) - with sodium azide (NaN3), which is used as a propellant in car air bags, they were able to create hydrocarbon-soluble uranium nitrides. These uranium nitride compounds consist of repeating 24-atom rings with the overall pattern (UNUNNN)4. The rings are flexible and can adopt multiple configurations. 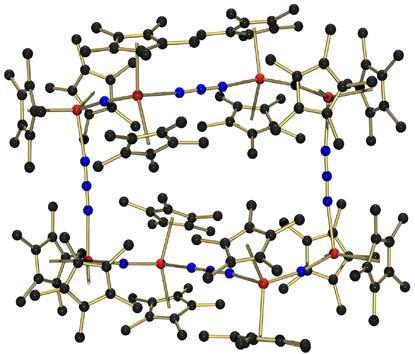 Evans and his team are now looking at ways to transform these compounds into pure UN, which could be used as nuclear fuel. ’One target is to convert the remaining four azide ions in the 24-atom U8N16ring to nitrides to make a U8N8ring,’ Evans told Chemistry World. ’This would have exactly the right uranium-nitrogen ratio for UN.’

The findings should also allow scientists to further their understanding of actinide compounds in general. In an accompanying comment piece in Science, Carol Burns of Los Alamos National Laboratory, California, predicts that the organometallic complexes developed by Evans and his team could be used to synthesise whole new classes of actinide compounds. Jon Evans