A colour is worth a thousand spectra 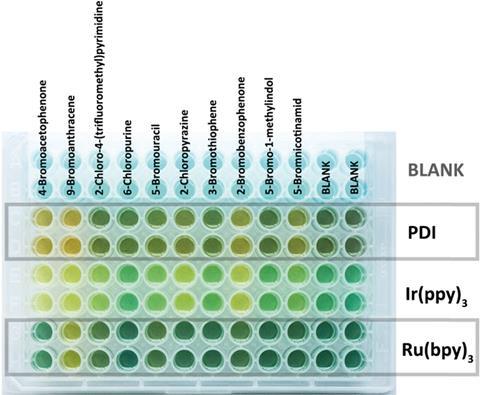 Scientists from Germany have developed a quick and low-cost screening method for photocatalytic reactions based on a simple change of colour.

Chemists are constantly discovering and optimising new organic reactions. Small scale screening methods mean they can simultaneously perform many reactions while changing reaction parameters such as reagent concentration or catalyst. However, analysing the reaction outcome often requires expensive technical equipment such as gas or liquid chromatographs or a mass spectrometer, as well as a lot of time to monitor and quantify the results.

Now, Burkhard König and a colleague from the University of Regensburg have developed a simple colorimetric method to analyse the outcome of photocatalytic reactions. An organic dye changes colour if a reaction works and can even indicate how much of the starting materials has been consumed.

Instead of detecting the main products, which might be different in each reaction, König’s team focused on the small byproducts formed in all photocatalytic reactions – namely reactive oxygen species such as H2O2, or protons. The organic dye reacts with those byproducts, and changes colour and shade depending on their amount. This allows scientists to rapidly scan for new photocatalytic reactions and catalysts, and optimise reaction conditions without needing expensive analytical equipment.