A sweet way to make graphene 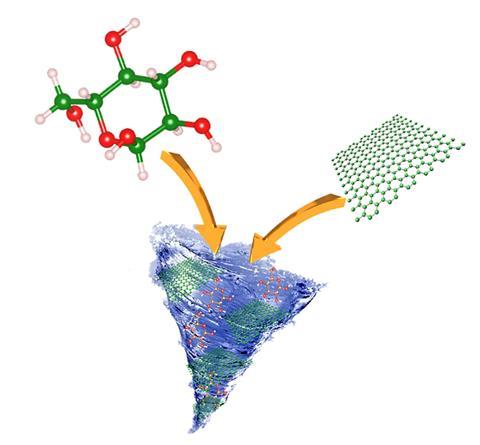 Scientists in Spain and Italy have developed a new approach for preparing graphene just a few layers thick, using a mechanochemical technique that exfoliates graphite with carbohydrates.

Currently, one of the most common and successful ways of producing graphene involves exfoliating graphite using sonication. This requires toxic solvents, such as dimethylformamide (DMF) and N-methyl-2-pyrrolidone (NMP). Scientists are therefore after an alternative production method.

The main drawback of using graphene for biological applications is its poor stability in aqueous systems. ‘Graphene is a strongly hydrophobic material, which aggregates in water and precipitates. To study graphene in biological media, it needs to be dispersed in aqueous solutions, without the use of toxic detergents,’ explains Ester Vázquez from the University of Castilla-La Mancha, Spain.

Now, Vázquez’s team has devised a new green method for making the nanomaterial that could also make it easier to investigate in biological studies. The method uses ball milling and glucose to exfoliate graphite to make graphene. Additionally, by adding small amounts of water to the ball milling treatment, the team produced graphene–glucose co-crystals. ‘The formation of co-crystals is a common technique used in the pharma industry to dissolve or suspend drugs in water without excipients,’ explains Vázquez. ‘Co-crystals do not alter the drug’s properties, in our case graphene’s properties. Therefore, we devised this method to achieve safer graphene that can be suspended in water and culture media.’

‘Many groups use mechanochemical treatments for the exfoliation of graphite. The novelty of this work is in the fact that they use sugar instead of NMP and DMF, which are toxic compounds and have been shown to have harmful side effects to humans,’ remarks Andrea Ferrari, director of the Cambridge Graphene Centre, UK. ‘This approach is promising in that it allows you to exfoliate graphite for interactions with cells.’

Vázquez envisions many potential applications for her team’s method: ‘We could incorporate graphene in hydrogels and generate 3D scaffolds able to host nerve cells, making our system ideal for growing 3D cellular scaffolds.’