Grinding up small molecules to make larger ones may seem counterintuitive, but scientists in Germany have done just that. The new protocol produces large nanographenes using a solvent-free mechanochemistry process, alleviating critical problems related to the poor solubility of the starting materials.1

The traditional bottom up approach for making polycyclic aromatic hydrocarbons (PAHs) and nanographenes usually involves an acid-catalysed oxidative condensation reaction between two arene compounds – known as the Scholl reaction. Normally the Scholl reaction requires a solvent, though highly aromatic molecular systems, such as nanographenes, suffer from poor solubility so are difficult to synthesise.

Now, Lars Borchardt at TU Dresden and his team have removed the need for a solvent by producing hydrocarbons from a hexaphenylbenzene precursor using a technique known as ball milling. Ball milling uses intense mechanical forces to initiate chemical reactions, offering a safer, simpler and more sustainable route for synthesising these molecules. ‘We can also broaden the feasibility of this famous reaction towards molecules that are insoluble,’ explains Borchardt.

‘Other techniques to assemble large organic aromatic structures normally depend either on fairly harsh conditions or require functionalisation to make the starting materials more soluble, explains Tomislav Friščić, a solid state and mechanochemistry researcher at McGill University, Canada. ‘This means that chemists, not only in this field but in many others as well, often cannot work with the starting materials they would like to, but with those that are the most soluble. Mechanochemistry avoids these complications.’ 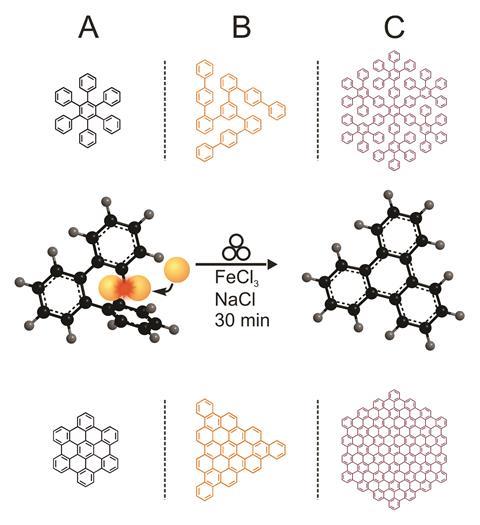 Scholl reaction of different polyphenylene precursors (hexaphenylbenzene (A); C60H42 (B); C222H150 (C)) with iron(III) chloride in a planetary ball mill to produce the benchmark PAHs hexabenzocoronene, triangular-shaped C60 and C222

‘Sometimes adding a solvent has no effect on a reaction, and sometimes it can massively accelerate it,’ comments Stuart James who researches mechanochemistry at Queen’s University Belfast, UK. ‘What was found here was that adding a small amount of solvent seems to suppress the reaction. This might point to some more general principles that we are not aware of, in that we may be using solvents habitually and there may be other cases where the solvent is actually slowing the reaction down.’

As well as producing benchmark nanographenes, such as triangular shaped C60, the team managed to synthesise C222 – the biggest reported PAH with a well-defined structure that is extremely hard to planarise in solution. They synthesised the molecule within a matter of minutes – its original synthesis took 24 hours2 – as their method does not depend on the size of the precursor.

Borchardt’s team are now working on synthesising larger nanographenes using this method. Friščić says Borchardt’s findings could rejuvenate the search for new electronic and solar energy materials, and contributes to a growing body of evidence that long-standing hindrances of chemical synthesis can be resolved by eliminating solvents.