A UK government clamp-down on internet abuse is being rushed through parliament following the apparent ease with which terrorists can obtain the wherewithal to make bombs like those used in the recent attack on London.

’Terrorist and extremist use of the internet poses a significant threat,’ a Home Office spokesperson told Chemistry World, ’We are already working with our G8 and European partners to find ways to tackle the sites and identify individuals and groups responsible. People who download bomb-making instructions and then try to follow them could well be guilty of the new proposed Act Preparatory to Terrorism offence, which we announced on 18th July, and will be taken forward into the new Prevention of Terrorism Bill.’

The internet provides precise instructions on how to make acetone peroxide, the suicide bombers’ weapon of choice. Common household ingredients - paint thinners (acetone), bleach or antiseptic (hydrogen peroxide), and a powerful drain unblocker (>85 per cent sulphuric acid) - can be obtained from hardware stores and pharmacies. Mixed in the right proportions, these ingredients produce white crystals of acetone peroxide. 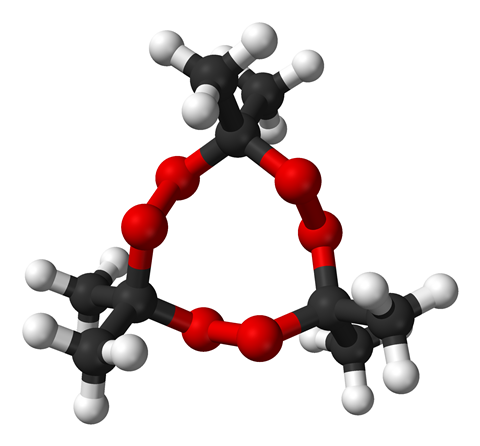 The explosive power of acetone peroxide (or triacetone triperoxide - TATP - its correct chemical name) is close that of TNT. TATP is highly sensitive to heat, friction and mechanical shock, so much so that inexperienced handling can lead to maiming and death. Anti-terrorism experts report that the compound is known as ’Mother of Satan’ by Islamic extremists for its devastating instability. It doesn’t say much for any health and safety in the workplace policy of the Palestinian militant organisation Hamas that 40 Palestinians have allegedly been killed while handling TATP.

TATP was, until recently, difficult to detect. It can be combined with other explosives as a detonator, most famously in the abortive attempt by Richard Reid, the so-called ’shoe bomber’, to blow up a transatlantic flight in December 2001.

The acid-catalysed peroxidation of acetone leads to up to three forms of acetone peroxide, including a monomer, cyclic dimer, and a cyclic trimer.

The trimer is generally thought to be marginally more stable than the other two and is formed preferentially when the temperature of the reaction and subsequent product formation is kept below 10 degrees Celsius. Some of the more unstable dimer is always found associated with the trimer, and TATP degrades over long-term storage, making it unsuitable for conventional explosive ordnance - but ideal for the hit-and-suicide attacks favoured by extremists.

TATP is an unusual explosive. ’We normally think of explosive materials, like fuels, as highly energetic compounds, releasing their energy content in fast, exothermic reactions. So, excessive heat of formation has been considered to be the key property of all explosives,’ said Ehud Keinan, professor of chemistry at Haifa Technion, Israel. He and a team of researchers in Israel and Germany have been investigating the dynamics TATP explosions. ’Although TATP does burn when it is set alight, releasing large volumes of carbon dioxide and water, it appears that very little heat is created when it explosively decomposes,’ said Keinan.

Calculations from Keinan and his team predict is that TATP undergoes an entropic explosion, each molecule of TATP collapsing to produce three molecules of acetone and one of ozone. ’A supersonically propagated entropy burst drives the explosive power of TATP, not the usual heat generated during the decomposition of conventional explosives,’ he concluded.