All aboard the DNA nanotube

Cargo-carrying DNA nanotubes that can rapidly release their load on demand have been made for the first time by Canadian researchers. The self-assembling nanotubes could help towards the development of biosensing systems or ’nanocapsules’ that specifically target diseased cells for drug delivery, the team says.

DNA’s properties, including chirality and geometry, make it a particularly good construction material for self-assembling nanotubes. Until now, however, no one had figured out how to enclose ’guest’ molecules within 3D DNA structures and then release them. But Hanadi Sleiman and Gonzalo Cosa’s groups at McGill University in Montreal have now done just that.

’Almost all the DNA construction approaches - such as DNA tiles or DNA origami - reported so far have relied on the use of only DNA to guide the assembly,’ says Sleiman. ’In contrast, we incorporate synthetic molecules, such as organic molecules or transition metals, in the junctions of our DNA structures.’ 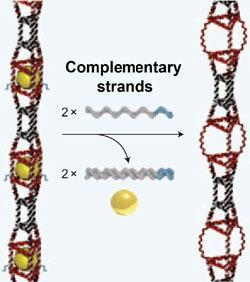 When the team assembled double stranded nanotubes in the presence of different sized gold nanoparticles, the particles became trapped inside their respective sized capsules like peas in a pod. ’In effect the nanotubes act like sieves, and select the correct sizes to encapsulate,’ says Sleiman.

To release the cargo, the team added specific strands of DNA that are complementary to the DNA strands that close-in the particles. This causes the nanotubes to become single stranded, thus opening up the capsules and allowing the gold nanoparticles to escape.

Renowned US chemist George Whitesides at Harvard University in Cambridge, Massachusetts, comments that these new tubes are an interesting demonstration of how to make new types of molecular structures from DNA building blocks. ’Being able to include "cargo" is an additional plus, and reflects, in part, the ability of these DNA-based systems to make very large molecules,’ he says. ’Since DNA is taken up, in certain circumstances, by cells, the combination of tubes and cargo might provide a way of transporting molecules across cells.’

Indeed, Sleiman suggests her team’s approach could have several applications, including drug delivery: ’If the ’closing strands’ of our DNA nanotubes were designed to bind to cancer-specific proteins, they could dissociate when the nanotubes are near a cancer cell, and then release the guests specifically at the site.’

However, she acknowledges that several challenges, including stability and safety of the DNA structures, must be overcome for such an application to become a reality.