Precursors to molecules essential for life can be produced without enzymes 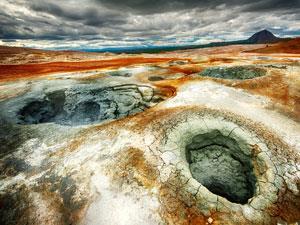 Primitive metabolism of sugar phosphates may have started spontaneously in ancient oceans around 4 billion years ago and given rise to life, according to UK researchers. The work provides the first experimental evidence to support the idea that the first metabolic reactions were catalysed by metal ions, not enzymes, and a precursor to life.

The idea that metabolism came before life is not new. However, with little experimental evidence scientists had a hard time explaining how complex metabolic pathways found in all living organisms could have arisen from environmental chemistry alone. The prevailing ‘RNA World’ theory suggests that RNA came first in order to produce the necessary enzymes for central metabolic processes of life.

Now, Markus Ralser and colleagues at the University of Cambridge, UK, have shown that simple metabolic reactions similar to glycolysis and the pentose-phosphate pathway – which produce precursor molecules essential for nucleic acids, amino acids and lipids – can occur without enzymes under conditions analogous to those in the first oceans.

The work arose from a serendipitous discovery during a routine control test of media used to grow yeast cells. When injected into a mass spectrometer, they saw a peak for pyruvate – a sugar produced through glycolysis that should not have been there. They figured out that when the media was heated to sterilise it, pyruvate was forming. This led them to wonder if similar reactions could have existed in ancient oceans before life arose.

The team set up hundreds of vials containing different plausible ocean scenarios, including various metal ions, based on the composition of early sediments in the prebiotic Archean period. Sugar phosphate molecules that are metabolised by modern cells were then added and the vials were incubated between 50 and 70°C to mimic conditions in prebiotic oceans near hydrothermal vents.

‘You would expect that if you heat up such a molecule it would degrade or be stable,’ says Ralser. ‘But what you don't expect is that it interconverts into the next intermediate of the same pathway as in living cells. It was surprising to see that under conditions of the Archean ocean the whole thing gets much more efficient with many more reactions.’

Mass spectroscopy revealed 29 metabolism-like reactions that were catalysed by metal ions, including ferrous iron which appeared to be the most effective catalyst. As iron is thought to have been abundant in the Archean oceans it offers a plausible mechanism for how such pathways could have originated and subsequently been incorporated into living cells.

‘It is technically impressive and shows the power of modern mass spec methods as a tool for examining complex reaction networks,’ comments Jack Szostak, who investigates the origin of life at Harvard University, US. However, he disagrees with their conclusions. ‘In an ocean environment, I would expect that ferrous ion catalysis would simply speed up the processes of degradation.’

‘In the absence of coupling to an energy input, even reversible reactions are not going to spontaneously generate useful biological building blocks. I would conclude that metabolism had to evolve, within cells, one reaction and one catalyst at a time,’ Szostak adds.