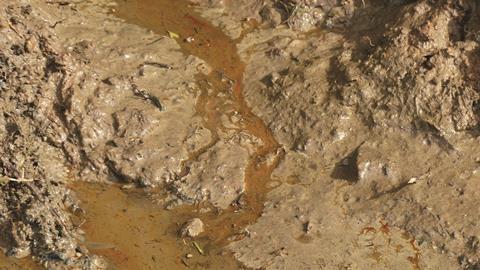 Drying ponds could have provided just the right gooey conditions for a self-replicating world of RNA to emerge on prebiotic Earth. That’s the finding of US researchers who suggest that pools of viscous liquids, generated by water evaporating on early Earth, assisted RNA replication by getting around a major barrier of the ‘RNA first’ model of the origin of life.

In the RNA first model the molecule performed both genetic and catalytic functions on prebiotic Earth, prior to DNA and enzymes. Any newly replicated RNA strands assembled from smaller RNA pieces using a larger piece as a template would exist as a double helix. But there is a problem with this: the duplex is highly stable.

‘The double helix would never separate to give two single strands,’ explains Steven Benner, a chemical biologist at the US Foundation for Applied Molecular Evolution, who was not involved in this study. ‘Even if they did separate upon heating, they would find each other to re-form the double helix, especially in competition with shorter RNA “food” pieces needed to form children duplexes.’

Life today has a coterie of proteins to assist DNA strands in separating and then staying apart during replication. But researchers at the Georgia Institute of Technology in Atlanta came up with a scenario that allows the two long RNA strands to stay apart long enough to form new duplexes, without requiring other agents.

Rather than RNA strands existing only in water, they envisioned RNA periodically in a solvent as viscous as honey. Once heated, the RNA strands would separate and drift away from one another. ‘When the solvent cooled down, our idea was that the small pieces would move more quickly through the viscous solvent than the big pieces, which makes intuitive sense,’ says Nicholas Hud, senior author of the new work supported by the National Science Foundation and Nasa.

Experiments demonstrated information transfer from 300-nucleotide templates of RNA and DNA within longer duplexes, up to 3000 base pairs in length. The solvent chosen was glycholine, a solvent composed of glycerol and choline chloride, which is more viscous than engine oil.

‘It worked better than we thought,’ says Hud. ‘The big strands not only move more slowly than smaller strands, but tend to fold on themselves.’ These intramolecular secondary structures further slow the reformation of the duplex, but do not impede smaller RNA pieces. The folded structures excited Hud’s team because they look similar to catalytic RNAs, which would have been needed to get life started.

‘The study shows that a solvent with high viscosity can reduce the annealing kinetics of long, complementary polymers while short oligonucleotides – which diffuse faster – can assemble on the long polymers,’ says Ulrich Muller, an origin of life biochemist at the University of California, San Diego. ‘It will be exciting to see how efficient this procedure works for multiple cycles, thereby enabling RNA amplification analogous to PCR.’

‘In the big picture,’ says Hud, ‘our work illustrates how local environments of the prebiotic Earth, and drying ponds of water in particular, could have been ideal places for the origin of life.’