Crystals of lithium niobate and lithium tantalate powdered and formulated as nanoparticles can act as a disinfectant, killing bacteria at only moderate temperatures, according to researchers in Germany. The crystal powders, which convert warmth into electrical energy and then chemical energy via the pyroelectric effect, could one day be used to disinfect air or water using just heat from the powder’s surroundings.

Recent years have seen a rising demand for simple and cheap disinfection methods, partly to address world health problems and partly to put less strain on the environment. One new method is to use high, pulsed electric fields to kill microorganisms. Another relies on oxygen-based semiconductors, such as titanium dioxide, which form reactive, bacteria-killing oxygen species on exposure to light. Such semiconductors have already been applied to specialist windows, which can then self-clean in the daytime. 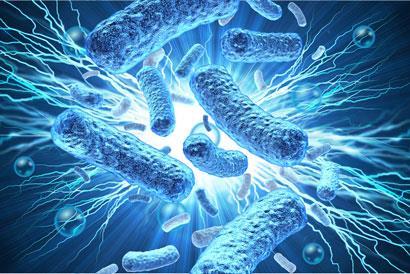 Powders of lithium niobate (LiNbO3) and lithium tantalate (LiTaO3) may be another technology to add to this list. LiNbO3 and LiTaO3 are pyroelectric crystals, which means they convert heat from their surroundings into a surface charge. Unlike many pyroelectric crystals, however, LiNbO3 and LiTaO3 are widely available, non-toxic and insoluble in water - properties that make them attractive for disinfection applications.

Emanuel Gutmann of the Freiberg University of Mining and Technology in Germany and colleagues ground crystals of LiNbO3 and LiTaO3 into sub micrometre-sized particles, and then mixed them with the bacterium Escherichia coli in aqueous solution. The researchers subjected the mixtures to heating cycles, which would alternate temperatures between 20 and 45?C - optimal temperatures for E. coli growth - over six hours. They discovered that - for particles less than 5?m in diameter, and after at least one hour of the heating cycle - the LiNbO3 powder could kill at least 80% of E. coli, whereas the LiTaO3 could kill 95%.

Gutmann’s group believes that the disinfection is a catalytic effect triggered by the pyroelectric surface charge, which causes reactive oxygen species to accumulate. Such species oxidise, and thus kill the E. coli bacteria. ’The investigation of powders is, in our opinion, just a first step towards a future application,’ says Gutmann. ’It is now necessary to develop macroscopic filters, membranes or surfaces, [in which] pyroelectric crystals are effectively immobilised but still bear a high specific surface area to sustain maximum contact with a liquid or gaseous media to disinfect.’

’This is a very interesting discovery,’ says Zhaorong Huang, a physicist at Cranfield University in the UK whose research centres on pyroelectric crystals. ’This pyroelectrocatalytic effect could potentially open a floodgate for novel applications for the pyroelectric effect.’