Artificial enzymes close in on nature

A synthetic metalloprotein that approaches the catalytic performance of a natural enzyme, despite its stripped-down structure, has been developed by a team of chemists in the US. The computer-designed carbonic anhydrase mimic is the work of Vincent Pecoraro and his colleagues at the University of Michigan in Ann Arbor. 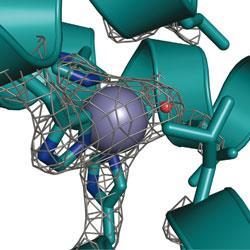 The active site of the enzyme, stripped of any ’second sphere’ structure

Pecoraro’s artificial enzyme catalyses the conversion of carbon dioxide and water into bicarbonate, a biologically important process that may one day also play a role in sequestering carbon dioxide from the atmosphere. The mimic - which consists of a three-stranded ’coiled coil’ protein biding a zinc-based active site - is only 500-fold less efficient at catalysing this reaction than the natural enzyme, a result 70-fold better than the previous best synthetic carbonic anhydrase.

This performance comes despite the artificial enzyme lacking the outer ’second sphere’ structure of natural enzymes which can stabilise transition states and assist proton transfer. ’We were pleasantly surprised by this level of catalytic activity,’ Pecoraro says. ’The work shows that if a metal can be bound in a hydrophobic environment in aqueous solution, a significant activity can be achieved without designing second sphere effects.’

Although the metalloprotein is Pecoraro and his team’s first foray into the world of artificial enzymes, it follows many years of research into the ways that coiled coil proteins bind metals. The researchers put this experience to good use, using de novo design to produce a protein that would selectively bind two separate metals. At one end of the protein lies the zinc active site, tucked within the protein’s hydrophobic interior, while at the other a mercury group helps to stabilise the structure at high pH.

’Our initial interest was really as a proof of principle to demonstrate this kind of design - but I’ve now presented this work several times, and a number of people have been interested in it as a possible method of CO2 sequestration, and as a tool to understand carbonic anhydrase activity in cancer metathesis,’ Pecoraro says.

The work is an important step forward for enzyme design, says Colin Jackson, who researches enzyme design and function at the Australian National University in Canberra. However, we still have some way to go to reach the efficiencies of natural enzymes, he adds. ’The enzyme is efficient - much more efficient than a small molecule catalyst, say - but still two-three orders of magnitude away from the activity of the natural enzyme. The more elaborate structure of natural enzymes, especially around the active site, probably contributes subtle rate enhancement effects that are currently missing in designed enzymes like this.’

Pecoraro agrees. ’The key to refining the properties - gaining another 100-500 fold activity - is clearly a consequence of second sphere or longer effects,’ he says. Refining the design of the enzyme to capture some of these effects is one of the next steps in the project, he says. ’We are working on modifying our design to incorporate hydrogen bonds and water channels to more closely mimic the activity of carbonic anhydrase.’