A new strategy for engineering metalloproteins – which can be used as a starting point for making new biologically-inspired catalysts – has been developed by chemists in the US.

The approach works by joining smaller protein units together to make a large three-dimensional structure with a metal coordination site, which Akif Tezcan at the University of California, San Diego and colleagues show can be done by making simple modifications to some of the amino acids.

Trying to design new functional proteins, such as enzymes, from scratch can be extremely challenging, says Tezcan. It can be particularly difficult to create a ‘well-defined 3D environment’ such as a binding pocket that can interact with a particular molecule or substrate.

‘Most protein and metalloprotein engineering efforts depend on the repurposing of pre-existing protein folds with well-defined active sites in their interiors,’ he says. ‘In our lab, we have taken an alternative strategy in which we use well-folded proteins as building blocks for forming new supramolecular complexes, and the [newly] created interfaces in these complexes are then used to build new functional sites.’

A few years ago, Tezcan’s group developed an approach which used metal ions to link different protein modules together into complex three-dimensional structures, which they subsequently used to build a functional metalloenzyme. In their most recent work they have streamlined this approach, showing it is possible to create new protein–protein interfaces by mutating a single cysteine residue in the protein cytochrome cb562, which allows it to join to another cytochrome cb562 via a disulfide linkage.

‘Then, a few metal-coordinating residues such as histidines and glutamates are added in appropriate locations with respect to the disulfide linkages to build stable metal coordination sites,’ says Tezcan. ‘[So] with only four mutations, an arbitrary electron transfer protein is converted into a versatile metalloprotein complex.’

The team were able to create metal coordination sites capable of binding transition metal ions such as manganese, copper, nickel, cobalt and zinc to make a variety of metalloproteins. They also showed they could make an iron metalloprotein that could bind to nitric oxide. They dubbed the strategy Metal Active Sites through Covalent Tethering, or MASCoT. 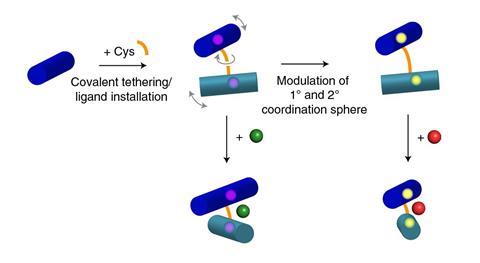 The MASCoT strategy uses intermolecular disulfide linkages to create flexible protein–protein interfaces that serve as an evolutionarily naive surface on which to forge diverse metal binding sites. This strategy does not require unnatural amino acids or cofactors and could work with a wide range of protein monomers (the red and green balls represent different metal ions)

‘In principle, this approach can be easily carried out with many other protein building blocks and be complemented by computational protein design to optimise desired structural and functional properties,’ Tezcan says. In the short term, he adds, the group wants to build metalloenzymes with catalytic activities including redox chemistry and small molecule activation. ‘Long term, our goals are to use MASCoT to design metalloproteins that are active in living systems and are able to utilise non-biological metal ions.’

Gerard Roelfes from the University of Groningen in the Netherlands, says the strategy is ‘unique’ and is an improvement on the group’s previous metal templating technique. That technique was much more complicated as it required creating both a structural metal site to link the protein together and a functional catalytic site. ‘The beauty of the present approach is its simplicity: it just requires introducing a cysteine at a certain position and then dimerising the protein and introducing a few metal binding residues,’ Roelfes tells Chemistry World.

‘The obvious next step is to modulate the environment of the metal site in such a way that actually it will be able to perform catalysis,’ he adds. ‘If they can actually create enzymes using this approach, then it has a bright future.’