Atomic weights for elements including hydrogen, carbon and oxygen to be stated as intervals

The atomic weights for ten elements are to be expressed as intervals rather than single values, the International Union of Pure and Applied Chemistry (Iupac) has announced. The decision marks a move away from the commonly held view of atomic weight as a ’constant of nature’ towards a more accurate interpretation based on naturally occurring variations in atomic weight. 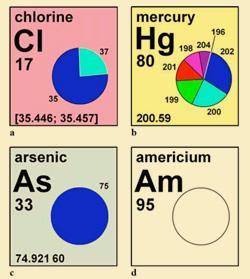 It has been known for many years that the atomic weight of an element can vary depending on its number of stable isotopes and their relative abundances. The idea that elements can be made up of more than one stable isotope goes back as far as the early 20th century and today these differences are exploited by labs all around the world in fields as diverse as food authentication and geology.

So, after all this time, why the change? According to Michael Berglund, a member of Iupac’s Commission on Isotopic Abundances and Atomic Weights, which proposed the change, it is purely because more reliable and precise measurement data are now available. He points out that in its previous form, the standard atomic weight for an element like lithium was just an average value. ’It would actually be very difficult to find a material with this exact atomic weight,’ he says.

’The truth’, as Berglund puts it, can now be revealed: that atomic weights are not constants of nature. The first ten elements for which atomic weights will be stated as intervals in the Table of Standard Atomic Weights are: hydrogen, lithium, boron, carbon, nitrogen, oxygen, silicon, sulfur, chlorine and thallium. But more will inevitably follow. Those up for discussion at the next meeting of the commission, in 2011, include helium, copper and lead.

Tyler Coplen, director of the US Geological Survey’s Stable Isotope Laboratory in Virginia, admits the change makes matters more complicated but thinks it’s ’fantastic’ for chemistry education. ’This is going to force teachers all over the world to learn about a thing called a stable isotope,’ he says. Iupac is currently working on a new isotopic periodic table showing atomic weights as intervals, which it hopes will be the highlight of the International Year of Chemistry next year.