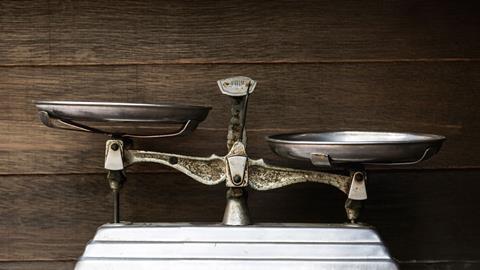 Noble gas’s days of having a fixed atomic weight argon

Argon’s days of having a fixed atomic weight are gone. For the first time since its discovery in 1894, the noble gas’s weight will be defined by an interval, reflecting how its isotope composition varies depending on the source. The International Union of Pure and Applied Chemistry (Iupac) also updated the atomic weights of another 13 elements.

Argon has three stable isotopes, but their ratio depends on where the gas comes from. On Earth, radioactive potassium-40 decays to argon-40 as the most common isotope. In stars, nucleosynthesis mostly creates the lighter argon-36 and argon-38. But even in terrestrial deposits, ‘isotopic abundance of argon-40 varies from around 94% to 100% depending on where it is from’, explains Juris Meija, who heads Iupac’s commission on isotopic abundances and atomic weights. In terrestrial samples the ratio of argon-36 to 38 to 40 is usually around 0.3:0.1:99.6, while in the sun it’s closer to 84:15:1.

The noble gas is in good company: alongside carbon, hydrogen and oxygen, it is the 13th element whose atomic weight is variable. However, when the concept was first introduced in 2009, it was quite controversial, Meija recalls. ‘Many people did not like [the intervals] because we were effectively depriving them of that single number they were used to.’

Another 13 elements, including gold, aluminium and praseodymium, received updates to their atomic weights. However, most changes are small, affecting only the weights’ sixth or seventh decimal place. ‘You’re not going to see many benefits from [these changes], but they remind us that these numbers are not written in stone,’ says Meija. ‘They are the result of measurements by scientists – and therefore they are subject to change and improvements.’

But for argon, the change might have a knock-on effect. The noble gas plays a pivotal role in measuring the Boltzmann constant. In ultra-precise measurements of this natural constant, which will be used to redefine the base unit of temperature, the kelvin, argon’s weight causes the largest uncertainties.