Chemists cultivate bouquets of nanoflowers to order, from dandelion-like precursors

Chinese researchers have discovered a simple way to grow nanowire clusters and transform them into an array of tiny flower-like forms.

Nanowires hold great promise as key components in nanoscale electronic and optoelectronic devices and sensors. But any future application depends on being able to make the wires with precise control over morphology, shape and structure.

Xiu-Ping Yan from Nankai University and co-workers have now discovered how to make highly regular nanoclusters of cysteine-lead wires, which initially resemble dandelions. The wires form spontaneously when a solution of lead acetate and cysteine is concentrated by steadily evaporating off the solvent - a simple process that works on large scale and at room temperature and pressure.

Yan proposes that the flowers form by a crystal splitting mechanism. The crystals grow quickly, and successively split apart as they grow, until finally forming the spherical dandelion structure. 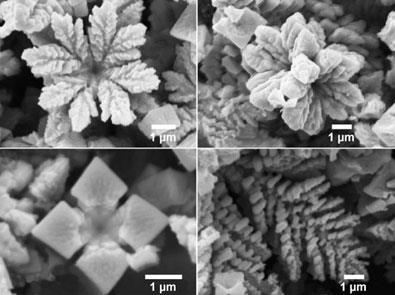 A few drops of acid and the dandelions dissolved, but subsequent heating in an autoclave gave a variety of new four- or eight-petaled nanoflower structures. The blooms consist of lead sulfide, a semi-conducting material. Yan’s team are now studying the exact mechanism by which these final structures form.