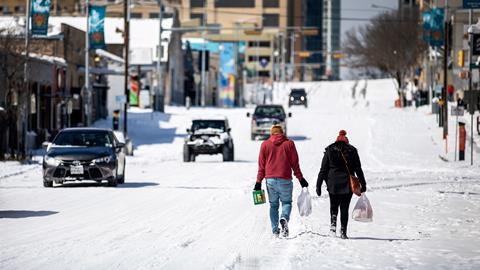 The winter storm that hit Texas last Sunday, creating a destructive deep freeze that lasted for days and led to massive power outages, has seriously disrupted researchers’ work at key universities in the state.

Among those affected is James Batteas, a professor and chemistry researcher at Texas A&M University in College Station. His 3000 square foot lab, which houses the 10 researchers in his group, is located in the basement of the chemistry building. The storm’s prolonged freezing temperatures led to burst pipes that flooded almost every room in the lab. 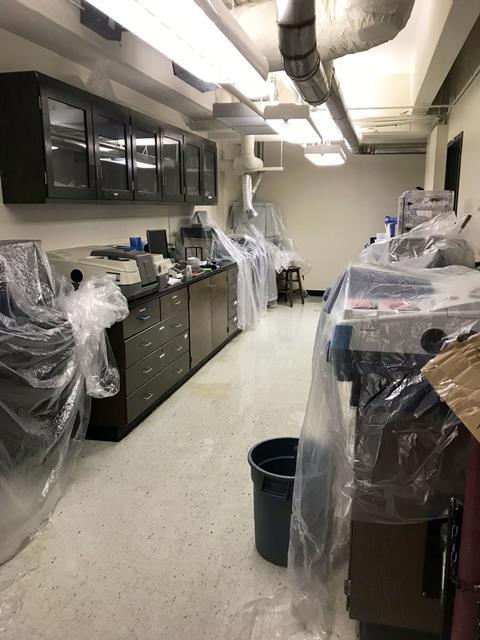 In preparation for the storm, his team shut down machines and covered major equipment. Unfortunately, one of the atomic force microscopy systems was directly underneath an area where water was pouring over the tarp. And a brand new desiccated sample chamber, which had arrived only days earlier, was sitting on a countertop where water was coming down on top of it. ‘That was the only spot in that room of the lab where there was water,’ Batteas tells Chemistry World. ‘It is definitely not desiccated anymore.’

There was standing water in parts of Batteas’ lab, and all the equipment was elevated off the floor by a few inches, including the electronics. Nevertheless, prolonged exposure to humidity and moisture could cause significant damage, he says. Batteas will have to let everything dry out completely before turning on any of the equipment to assess what’s been lost. ‘Fingers crossed,’ he says, noting that it will be at least few days before he will be able to take a full inventory, and say anything definitive about lab and equipment damage.

For now, Batteas and his team are on standby and will be working on manuscripts. ‘We actually have a lot of stuff to write up now and will go back mostly into a writing mode,’ Batteas says. He plans to slowly bring back a few students who live closest to campus to bring instruments back up when it’s safe to do so.

Jodie Lutkenhaus, a chemical engineering professor also at Texas A&M University, hasn’t been back to her lab since the storm. She has, however, seen pictures. ‘It was just crazy, it looked like a waterfall running down from the top to the bottom of the building, and multiple floors were damaged,’ Lutkenhaus recalls. 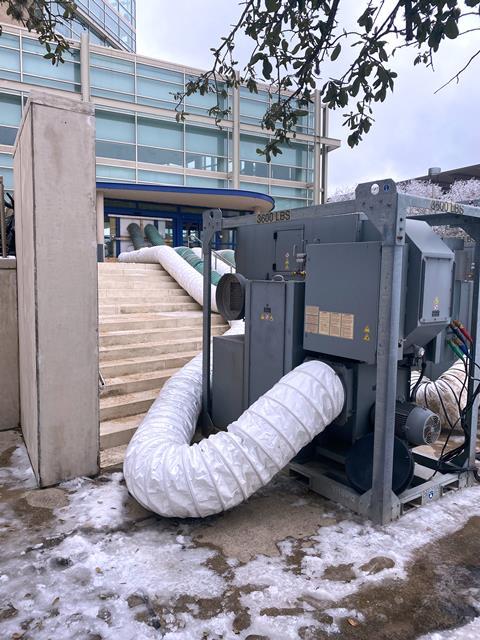 Lutkenhaus has no idea when she or her students will be able to resume their research. While her lab appears fine from all accounts, one of the pipes that burst was in the lab run by her husband – Ben Wilhite, also a chemical engineer. He was called to help survey the damage on Thursday. The equipment in his lab appears to be OK, but nobody can be sure until it is powered back on. ‘Some of this equipment has to run a for a long time before you know if it is working, and you also don’t want to turn it on immediately if there is water nearby,’ Lutkenhaus notes.

At the University of Texas in Dallas, the building that houses the lab of Jeremiah Gassensmith, an assistant professor of chemistry and biochemistry, is badly damaged. ‘The pipes that run the water to the sprinklers burst on the roof and then flood all the floors from the top to the basement,’ Gassensmith recounts.

The research facility is five stories high, and two of the wings have been seriously flooded. About half of the building is now closed. Although most of Gassensmith’s lab was in a wing that did not sustain damage, the building’s fire suppression system is frozen, so it is not safe for researchers to return to their labs. Therefore, nobody is yet allowed go in and assess the situation.

However, Gassensmith was allowed to go in briefly on Thursday since his students had left reactions refluxing that had to be unplugged. He has received word that a large number of the mice in his lab have died, and is not sure why. ‘They are part of a larger immunology study, and that is a pretty big loss,’ he explains. ‘These are mice that have cancer so it wouldn’t take much to kill them, for example if the vivarium wasn’t heated.’ This is a costly loss, both financially in terms of time and effort, according to Gassensmith. He says many colleagues down the hall are in worse shape as they have standing water.

The twelve graduate students on Gassensmith’s research team were last in the lab on Saturday, 13 February, and now it is unclear when they will be able to return. They have had trouble even working on manuscripts together because of the power issues caused by the storm. ‘Between this and the pandemic, I think many of my colleagues and myself feel utterly deflated and nearly broken,’ he says.