Potential bubbles up across wide range of uses as storage and test vessels, especially for poor countries

US researchers have exploded the assumption that modern science demands expensive precision labware by turning bubble wrap into versatile vessels for substances ranging from sulfuric acid to urine. George Whitesides’ team at Harvard University in Cambridge, Massachusetts, has demonstrated many possible uses, including blood tests and growing microorganisms. Backed by the Bill and Melinda Gates Foundation, this is the latest ‘adaptive use’ study where Whitesides’ team turns existing cheap products into diagnostic tools for the developing world.

The Harvard chemists became interested in bubble wrap because it looks like plastic multi-well plates used in many lab tests. ‘While plates are convenient, they are relatively expensive and not readily available in all areas,’ explains Whitesides. His team therefore showed that individual bubbles can be loaded with liquids either through syringe needles or blunt plastic pipette tips. They close the resulting holes with acrylate fingernail hardener or a re-sealable patch made from silicone sealant, both bought from local shops.

When they filled bubbles with water and dropped them into coloured dye solutions, no colour leaked in. This shows that it’s possible to store samples without contamination, which might allow blood or urine to be stored as a liquid more commonly. That would in turn allow better testing than when samples are stored dried on paper, as is common in poorer countries. However, not everything can be stored, because solvents like hexane and acetone dissolve the nail hardener. 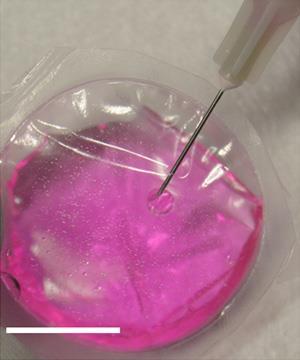 The bubble can be resealed using ordinary silicone sealant

The wraps’ bubbles are also gas-permeable, which is a potential limitation as it allows liquids stored in them to slowly evaporate. But because bubble inners are sterile it’s also an advantage. The Harvard scientists exploited the resulting oxygen availability to culture Escherichia coli that can cause diarrhoea and to grow Caenorhabditis elegans nematode worms. Whitesides’ team also did colour-change tests for blood glucose and haemoglobin. Although haemoglobin tests require toxic cyanide reagents, bubbles could safely store them until use and then be safely incinerated.

Ali Yetisen, at the University of Cambridge, UK, calls the work a good example of material adaptation, highlighting the wide range of roles that bubbles can fulfil. However, he notes some automated diagnostic devices already use them to store liquids, and adds that the need to use syringes and then reseal could be a weakness.

Whitesides admits this is the biggest of bubble wrap’s ‘obvious limitations’, but is optimistic that it’s outweighed by its benefits. ‘We believe that these problems can be solved,’ he says.