By using small molecule precursors, scientists have found a way to precisely build up sought after graphene nanoribbons, and make them in different shapes.

Graphene is a single layer of carbon one atom thick, and is being much investigated for electronic and display applications. Small fragments of graphene are particularly of interest as their small size means that the bandgap, or difference in energy between the conducting and non-conducting states, is suitable for conducting electricity.

Most routes to make nano-graphene are top-down - starting from a bulk material and breaking it up - and it has been tricky to make nano-sized ribbons of graphene with a defined structure of a size that would be useful in nanoelectronics. 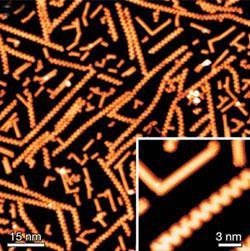 The researchers made both straight and zig-zag graphene nanoribbons

Now, researchers based in Switzerland, Germany, and France have built graphene nanoribbons around 1nm wide from small molecule precursors. They first heated a brominated ’precursor’ molecule on a metal surface. The metal catalyses the loss of bromine to leave radical species on the surface which act as the building blocks for the graphene ribbon, and the radicals then combine into a long chain. Further heat causes the chain react to give an aromatic 2D ribbon.

Depending on the precursor used, the scientists can make either linear ribbons or zig-zags. Because the ribbons are made by building them from the bottom up, they are all identical in size and shape.

’The bandgap is inversely proportional to the width of the ribbon,’ explains Roman Fasel from the Swiss Federal Laboratories for Materials Science and Technology in D?bendorf, Switzerland, who led the surface work. ’Ideally you would define the bandgap by choosing the width of the nanoribbon.’ His team is well on the way to this ideal with two different widths of ribbon already made and work ongoing on more.

To make the ribbons useful in the near future, the team are working on growing them on a different surface or transferring them from the metal surface on which they are grown. The anticipated good conductivity of the ribbons must also be confirmed.

Andrea Ferrari, an expert in nanomaterials from the University of Cambridge, UK, believes that this work is a big step forward for graphene science, where one of the major issues is the production of controlled, individual nanoribbons. ’Several approaches were previously used to make ribbons, however this is the first time that they have been made small enough to have a large bandgap, useful in nanoelectronics.’
Carol Stanier