Can chemistry save our libraries?

Three out of every four books in Europe’s libraries are printed on acidic paper that isn’t expected to last another century. That was the message heard by delegates at the Iupac World Chemistry Congress in Turin, who were asked: can chemistry rescue our written heritage? 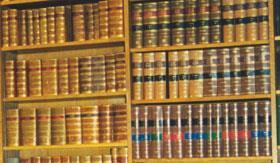 The familiar, earthy smells that waft from the page as you leaf through a dusty old tome in the library are in fact the bouquet of the book’s decay. Measuring the volatile organic compounds (VOCs) that the paper gives off is one non-destructive method which Matija Strlic, from the University of Ljubljana, Slovenia, and colleagues have developed to assess old books.

Books made between around 1860 and 1990 are the real concern, said Strlic - and these are the books that make up the bulk of most library collections. Before 1850 or so, paper was made by hand from clothing rags. This gave a paper with high quality fibres and neutral pH, which is expected to last several millennia.

But once paper making was industrialised, the sheets made by the new process were of pH 4 to 5. Left untreated, this paper will only survive a couple of hundred years before disintegrating, due to gradual depolymerisation of the cellulose fibres by the acid.

Since 1990, due to environmental concerns over the old technique, paper production was changed. This process gives pH-neutral paper that should last 500 years.

Strlic, and other members of a project called SurveNIR, have developed a near infrared (NIR) technique to assess a book’s condition. Collections of books can be ’mass-deacidified’ - the scale of the problem rules out carefully treating each individual book - but first the paper must be checked to see if it needs the treatment, and that it’s strong enough to withstand the process.

Traditionally, this meant applying a wet pH probe to a page, leaving a stain which accelerates the paper’s decomposition, and then checking the paper’s strength by repeatedly folding the corner of a page to see how long it took for the corner to fall away.

’The NIR is an integrated approach that can tell you both the pH and the mechanical properties of the paper,’ Strlic told Chemistry World. The process, which leaves the page completely unmarked, works by comparing the peaks of the NIR spectrum with a library of reference spectra collected by the team that were correlated with mechanical and chemical methods. ’The SurveNIR project ends in July 2008, and we will definitely have a commercialised machine by then,’ added Strlic, ’although whether we will offer the instrument or a testing service, I’m not yet sure.’

In addition to NIR, Strlic has used VOCs as a non-destructive way to measure paper pH, sampling these compounds using gas chromatography-mass spectrometry (GCMS). While Strlic doesn’t see this technique as being as useful as NIR, VOCs themselves can damage paper, so must be monitored and filtered out of the air in archives, along with acidifying environmental pollutants like SO2 and NOx, to preserve the books, he said.

A further problem faced by conservators is an acidic, transition metal-based ink called iron gall ink, unfortunately used by Leonardo da Vinci, Johann Sebastian Bach, Victor Hugo and Galileo Galilei, said Strlic. In addition to the acidity, the metals in this ink are effective oxidation catalysts, which accelerate the breakdown of the cellulose.

While deacidification solves part of the iron gall ink problem, the presence of the transition metals must also be addressed. This is done by applying antioxidants to the paper, to suppress the metal-catalysed free radical breakdown of the cellulose. Antioxidants developed for this purpose by Jana Kolar from the National and University Library in Ljubljana and colleagues are currently being patented.

Jan Wouters, of the Royal Institute for Cultural Heritage in Brussels, Belgium, presented a related talk at the meeting on the cautionary tale of a valuable 8th century illuminated manuscript, the Codex Eyckensis. A previous generation of conservators had tried to protect the codex in the 1950s by laminating each page with PVC. As well as impacting on the look and feel of the artefact, this laminate had accelerated the decay of the parchment pages and had to be painstakingly removed.