Can you feel the chemistry?

Humans can discriminate between different surface chemistries using their fingers

Most of us wouldn’t expect to be able to distinguish between two identical surfaces differing only in their single uppermost layer of molecules. But that is exactly what scientists in the US have shown. 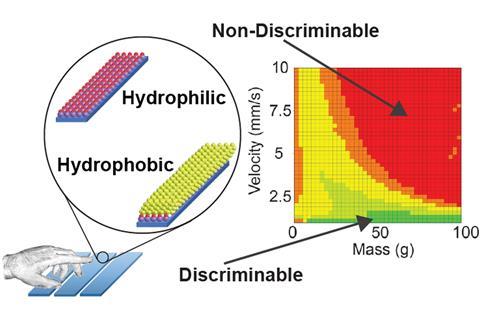 Human test subjects could distinguish regions of hydrophobicity and hydrophilicity

Darren Lipomi, from the University of California, San Diego, and his team took silicon sheets and treated them to obtain silanised surfaces (hydrophobic) and oxidised surfaces (hydrophilic). They then asked study participants to run their fingers over three samples combining two of one surface and one of the other, and identify the odd one out. Human subjects could not only discriminate between the surfaces given free exploration, but, in another experiment in which sequences of hydrophobic and hydrophilic patches were created on a surface in the form of characters in the ASC II alphabet, could also read the word “Lab”.

Lipomi says the study manages to ‘marry the fields of psychology, specifically psychophysics, with contact mechanics mediated by materials chemistry’. Until now research on human sensing has focussed on surface roughness and topography. Attention has only recently turned to surface chemistry and Mark Rutland of the KTH Royal Institute of Technology in Stockholm, Sweden, whose group has been working on similar research, agrees that this is ‘the next puzzle piece in the puzzle that is tactile perception’.

Using a model finger made from a silicon-based polymer the researchers analysed the force with which the participants pressed the surface and the speed at which they moved their finger across the surface. They concluded that humans hone in on combinations of these forces and speeds to discriminate surface chemistry.

Lipomi and colleagues have ambitious plans for their findings. They are designing gloves using electronic and mechanically reconfigurable materials that will allow users to feel an object when they touch it virtually. Other applications include robotic surgery and devices to stimulate the tactile sense in premature infants confined to incubators.