Carbene monolayer technology on a roll

Researchers in Germany have shown how N-heterocyclic carbenes (NHCs) may form tiny ‘ballbots’ on the surface of gold by pulling a single atom up from the surface and rolling around on it. The observations explain how NHCs form self-assembled monolayers on gold, and may provide a method to tailor these monolayers’ properties. 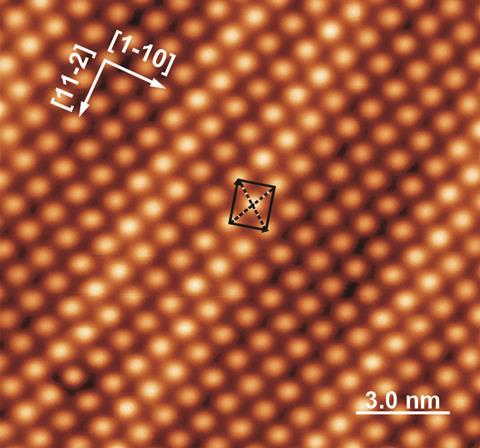 NHCs self-assemble into monolayers on a gold surface

Typically thiols – rather than carbenes – are used provide a link between an organic receptor and a metal surface in nanotechnology, sensing and microelectronics applications. But this link is fragile, with the ligands detaching slowly even in air. In 2014, researchers at Queen’s University in Ontario, Canada showed NHCs could provide a more robust link. Theoretical calculations indicated the link should be so strong that the NHC molecules would stick rigidly to the first point on the surface they hit. Organic chemist Frank Glorius of the University of Münster says this is puzzling: ‘If they weren’t able to move around, they wouldn’t be able to form a nicely organised self-assembled monolayer,’ he explains.

In separate experiments, Glorius and colleagues deposited pure vapours of three NHCs on gold under ultra-high vacuum. They analysed the resulting surfaces under a scanning tunnelling microscope, observing that two of the carbenes were highly mobile, first covering the edges of the surface, then, as more carbene was deposited, forming islands that easily broke up and re-formed. Even when the surface was completely covered, defects were mobile, showing that the carbene molecules were still moving around. 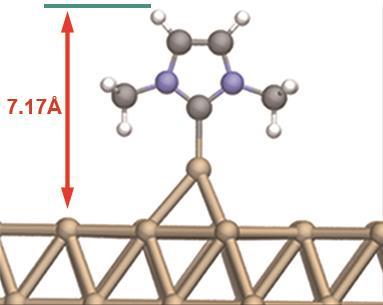 A single gold atom is pulled above the surface, allowing the carbene to roll around like a ballbot

The researchers noticed that the gold atoms underneath the NHCs were sitting slightly above the surface. They have therefore proposed that the carbene ligand bonds strongly to a single gold atom, pulling it up from the surface to create a vacancy, which is immediately filled by another gold atom below. The raised atom then moves freely on the surface like a ballbot – a robot that can rotate and move on a single, spherical wheel, much like the rolling BB-8 droid from Star Wars. Density functional theory models support these conclusions. The researchers believe the third carbene that moved less freely was held in place by attractive interactions between the side groups and the gold surface. They are now investigating this systematically: ‘We want to really learn more about which structures of carbenes lead to mobility or the lack of it,’ says Glorius.

‘I think there are a lot of important results in the paper,’ says Cathleen Crudden from the Queen’s University team, who was not involved in this research. She says that, although her own and others’ work had provided strong indirect evidence that carbenes could form robust monolayers on gold, ‘We always want to see the pictures of the molecules…The images that they’ve shown really give us an insight into how these things pack.’ She concludes the paper is ’extremely encouraging for chemistry in this area’.