Scientists have designed a porous material that is selective for carbon dioxide over other gases and determined the motion of the gas as it diffuses through the crystal. They found that carbon dioxide travels like a screw through the material’s charged helical channels, at speeds that resemble molecules crossing transmembrane channels. 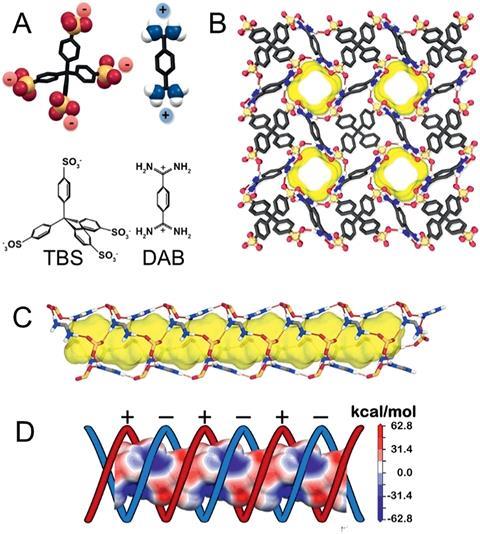 (A) The porous organic framework is constructed from 4,4′,4′′,4′′′-methane tetrabenzenesulfonate and 1,4-diamidiniumbenzene synthons.(B) View of the porous framework along the c-axis; yellow represents the empty channels. (C) The synthons are connected through a hydrogen-bonding network in a helical fashion. (D) Electrostatic map showing the positively and negatively charged helicoidal ribbons

Many porous materials absorb carbon dioxide as well as other gases such as nitrogen and methane. However, achieving selective uptake from a mixture of gases remains a challenge. Now, a collaboration between Piero Sozzani and Angiolina Comotti from the University of Milano-Bicocca, Italy, and Teng Ben from Jilin University, China, has set out to create a molecular material with a preference for carbon dioxide.

The researchers exploited the fact that carbon dioxide is quadrupolar; the oxygen atoms have partial negative charges, and the carbon atom a partial positive charge. ‘Our idea was to introduce charges along the cavities of the material to trap carbon dioxide,’ explains Sozzani. To achieve this, the team used highly charged precursors to create a porous organic salt. They reacted tetrahedral organotetrasulfonates with linear organodiamidiniums to form a molecular material with a three-dimensional structure. Interestingly, the negatively and positively charged regions were arranged as a double helix of charges, resulting in electrostatically charged channels for gas to diffuse through.

In gas capture experiments, the group found that the material was highly selective for carbon dioxide with one of the highest carbon dioxide/nitrogen selectivities shown to date in porous molecular materials. This selectivity results from the snug one-dimensional pores and complementary electrostatics in the channel. ‘The dimension of the channel is rather specific for the carbon dioxide molecule,’ comments Sozzani.

The scientists used solid-state NMR spectroscopy alongside molecular simulations to understand how carbon dioxide diffuses through the material. They revealed that carbon dioxide interacts with one charged site on the wall of the channel, before twisting and hopping to the next site. ‘The channels are perfectly fitting for carbon dioxide, but carbon dioxide can also shift inside the channels from one site to the next,’ says Sozzani. ‘The movement is a kind of screw along this helical distribution of charges; this was very exciting for us!’ 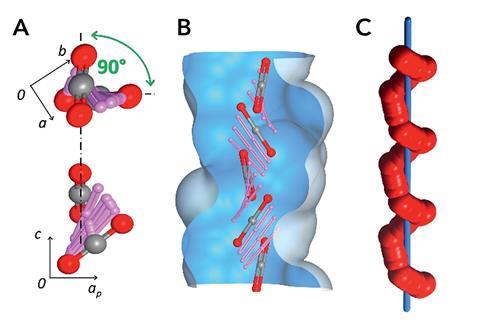 The team found that the screwing dynamics through the channel occur at one million steps per second, behaviour that is reminiscent of transmembrane transport in biological channels. Mike Zaworotko, an expert in crystal engineering from the University of Limerick, Ireland, agrees this is a valid comparison. ‘The general rule of thumb is that the narrower the pore size, the slower the kinetics; this is not the case here,’ says Zaworotko. ‘The material has two very interesting properties: high selectivity for carbon dioxide over other relevant gases and fast kinetics. The vast majority of porous materials exhibit neither of these properties.’

Len Barbour, an expert in porous materials from Stellenbosch University, South Africa, is impressed that the researchers determined the mechanism of carbon dioxide diffusion. ‘They’ve been able to build in very high selectivity for carbon dioxide by tailoring the electrostatics of the channel so that it is compatible with carbon dioxide,’ he says. ‘It’s a very nice demonstration of how you could put solid-state NMR characterisation together with dynamic simulations.’